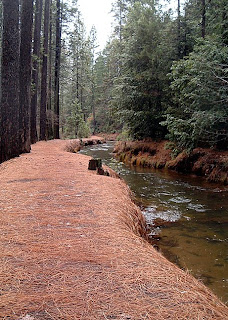 We had finished another half mile of pundit walking, and were starting to retrace our steps.

Whatever the scent, it stirred his passion, and he bolted ahead pulling the snout loop of his Gentle Leader up to his eyes.

He didn't even sniff the ground -- he was trailing air-born particles like a bloodhound, pausing only to box his muzzle like a punch drunk pugilist -- he hates the Gentle Leader.

Had a cougar been tracking us?

I know a couple of dog walkers who have seen them here, and one of them said the cat was clearly after his Akita.

In my mind's eye I saw us naively strolling with a cougar slinking in tow.

And sure enough there it was -- a large track in the soft ground -- no claws -- but no pad with the diagnostic 3-lobes was visible either.

We rounded a bend and saw 5 dogs -- medium-sized mixed breeds trotting toward us.

Fred fought the leash and yodeled to commence the chase.

I was tracking them here and there along the trail when I heard the plaintive whining of a dog.

A minute later we found a short-haired yellow pup floundering in the flume.

Without collar and perhaps 7 months old.

It  was struggling to claw its way up the bank and join its buddies who had disappeared in the woods.

It wanted no part of us. It was feral.

Fred jerked and the camera's batteries fell to the ground.

As I cursed Fred and loaded the batteries the pup got its footing and disappeared into the brush.

Who said walking the dog is boring?

Feral dogs and pet dogs both typically run away from humans that they suddenly meet out in the woods (and that's a GOOD thing!), but growling by the pup gives a feral away whereas a stray will probably not even snarl at you. A family pack will not accept your dog and might even kill it. A pack of strays, however, are competition for you, 'cuz stray dogs have a lot of fun roaming the woods together.

"Gentle Leader" - is that the name of the leash, or your future name when you become a benevolent dictator? :)

It's a double strap with a loop over the muzzle and the neck and it hooks to the leash from under the head. It offers better control on dogs that think they are mushers, and you can rein them in pretty easily because it pulls their muzzle down when they tug.

I may try Fred out on bikejoring so he can give vent to his mushing instinct.

I think this article is right on target. A lot of good points and advice on the subject. I have found that when doing my research, sites like this offer the best unbiased opinions and are very good in helping me make a decision. Another fine source of information on a Bark Collar, Dog Fence and Pet Door is available from this handy guide on Pet Supplies.