Coyote spooks at the badger dig 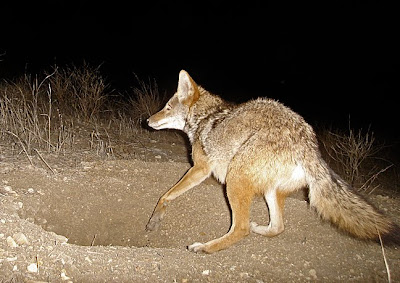 Like Black Tail Jack, Coyote also reacted with trepidation at the badger dig.

It's hard to say why, but it is not the camera that got its attention. 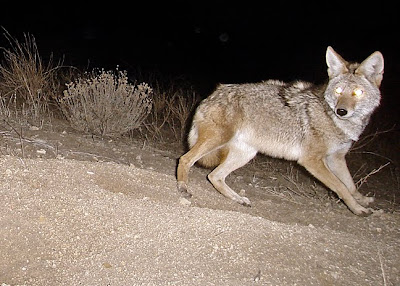 The source of threat had moved when the second photo was taken.

Coyote was photographed one last time "making tracks" and eyeing the threat, which seems to have changed its position. 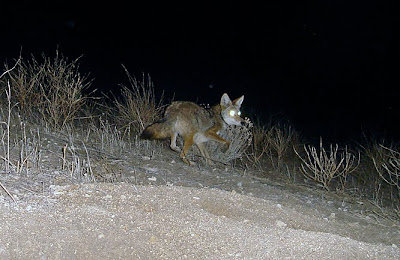 The images remind me of a scene in Lawrence of Arabia.

A peaceful scene in the desert gave way to panic.

For trespassing at the well the Bedouin paid with his life  -- shot dead while scrambling to his camel.

I am sure coyote was luckier.

If it met the resident honcho, its punishment probably wasn't anything worse than a bite in the butt.

Posted by Camera Trap Codger at 10:07 AM

Maybe the resident was at home!

That's some interesting behavior for sure. He's wary, but not fully spooked. Do the elk move around at night? Could they elicit that kinda response?

Elk are there, but the yotes are exposed to large ungulates (= catttle + horses + elk) all the time. I expect they respond to them as non-working farm dogs do, indifferent around healthy adults, interested in birthing cows, and the sick, the dying, and the dead.

Did you see this? Wildlife photog stripped of award for using trained wolf.

Thanks Kitt, but they must have pulled the page.