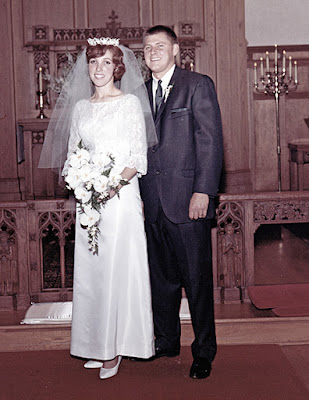 "I’m lucky she still likes me," said the codger.
Posted by Camera Trap Codger at 10:15 AM

Did you go to the "Black Bear" restaurant in Paradise to celebrate?

Congrats from a cam trapper in the Netherlands. I love this post as well. Nice!

Wearing a bear bell should do the trick and scare the bear away without the smell. Congratulations for your anniversary!

Awesome! Thank you so much for sharing your story. Seriously. It's assuring to know I can relate to some folks, regardless of the current turmoil.
: ) Kt

Thank you, readers. Jacques -- Fred wears a bell, and I am sure the bears mosey away when they hear us coming. We went to CM's , Ken, though BB Diner would have been appropriate.

Thank you for this wonderful story. Now, pretty much no matter what I do wrong on my own anniversaries, I can proudly say, "Yeah, but at least I didn't immerse you in a cloud of bear spray." Or so I hope. Fingers crossed.

Great tale well told. My very tolerant wife of 52 years had a somewhat similar experience after a canister of pepper spry that I had in the car apparently discharged on one of her gloves not long before she put the gloves on. We're lucky guys for having ladies who put up with pepper spray, snakes in the kitchen and bleaching skulls -- in other words, us.

Congratulations to both of you.

Thanks, Woody -- these ladies knew what they were getting into, and had the managerial skills to deal with it.