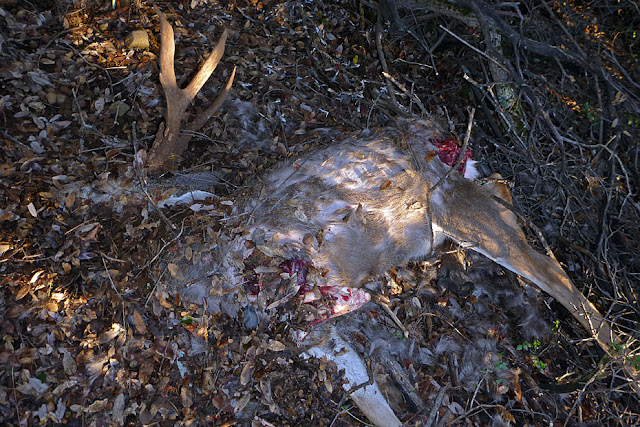 What a golden opportunity. Fascinating video.

Great catch; the subject makes up for the lighting. Thanks for posting the video Chris.

Love this! Miss your blog posts which are always THE BEST!

Thanks for sharing this with us.

That LED light doesn't seem to bother it much at all. Excited to see more videos with this rig.

Thanks folks -- no, the light did not seem to attract much notice from the cat, unlike the bears which come around and check them out.

Glad to see you blogging again, and kitties are always interesting to watch!

I got a similar opportunity on almost exactly the same date (a cow elk was killed by a mountain lion near my house). Most of our bears were in hibernation. Do you know if it's common that a bear can take control of a carcass from a cougar? I'm surprised by that.

KB Bear -- I have read that some mountain lions take one large meal and move on, which leaves the carcass for scavengers. Both the lion and bear seemed uneasy or perhaps just highly vigilant. I'd say that a large male black bear can be a formidable adversary of a mountain lion, esp a smaller female lion.

Good way of explaining, and good paragraph to get information concerning my
presentation topic, which i am going to convey in university.