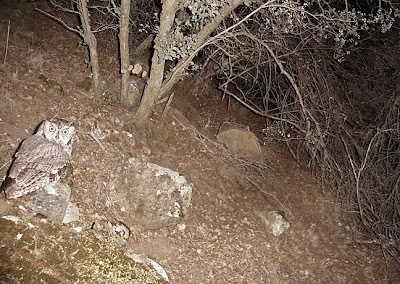 A Western screech owl perches near the camera
but at the edge of the frame where there was no eye shine.
Unless there's a visible bait, sound lure, or water you don't expect owls to come to camera traps.
Craig set a couple of cameras in or near gullies, which many mammals use as travel lanes.
He used a punctured can of mackerel under a rock as bait, and a couple of scent lures, none of which should attract owls.
The surprise was that an owl visited each camera. 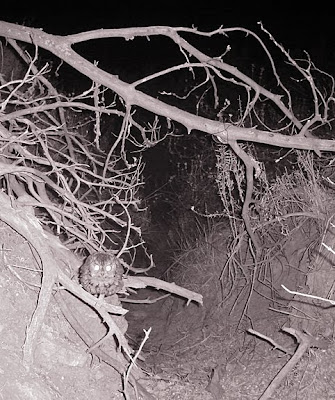 Western screech owl faces a gully camera. Picture was cropped,
but bird was close to the center of the frame, thus the eye shine.
You can't rule out the possibility that they were attracted to rodents attracted to the bait. 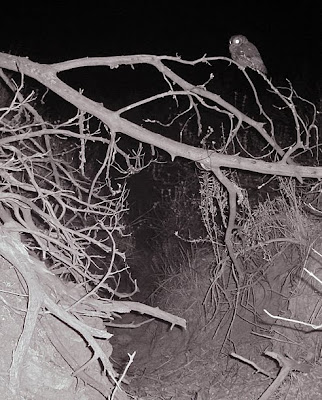 Second photo of the owl, after retreating.
Posted by Camera Trap Codger at 8:20 PM

Maybe your camera trapping has awakened the curiosity of the Goddess Athena? :)

Damn, that explains it . . . the mysterious appearance of owls, and my artsy craftsy mood these days.

Good idea! (punctured can of fish)I would agree with theory that the owl was attracted to a small rodent. I'll try that next time.
Thanks Codger.

I'm a bird researcher headed to Sabah, malaysian borneo in february. I'm looking to buy 2-3 camera traps to play with while I'm there. Any recommendations? Gotta be able to endure lots of rain and fit a biologists budget. Thanks in advance..

I know nothing about camera traps other than I enjoy the results! But I noticed that a recently received catalog from Cabelas had them featured on the back cover.

There are also probably cheaper places to get them, but if you don't want to do much in the way of searching...!

Andy, check out TrailCamProBlog on the side menu for reviews on various commercial cams... and good luck and have a great adventure.