Irresistable can in the ditch 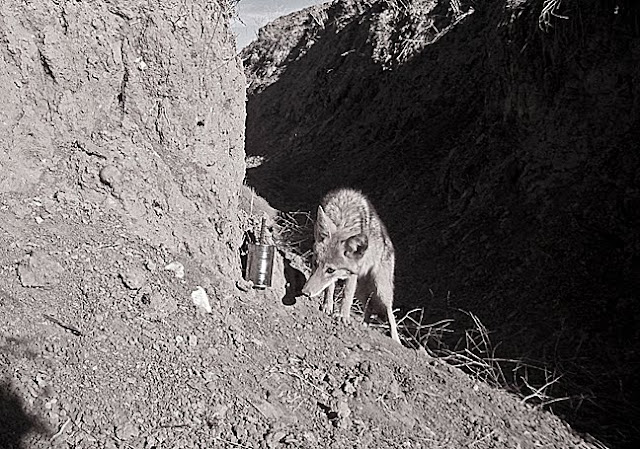 Once you punch a few holes in the can, the aging process begins.

After a few warm days the mackerel becomes an even more powerful attraction to carnivores.

The first yodel dog (above) appeared 5 days after Craig staked the can, and there were 8 more visits over the next 23 days. 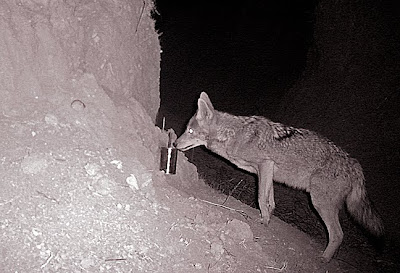 A pair of coyotes, perhaps the residents, passed by without approaching the sample closely. 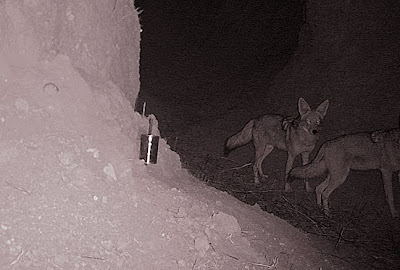 The others were apparently singletons/transients who sniffed deeply of the brewing fish, 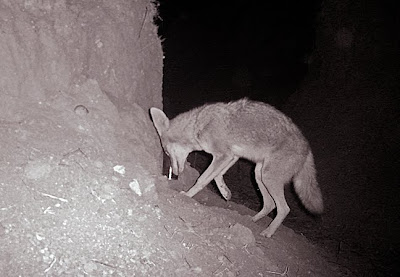 and scratched at the soil. 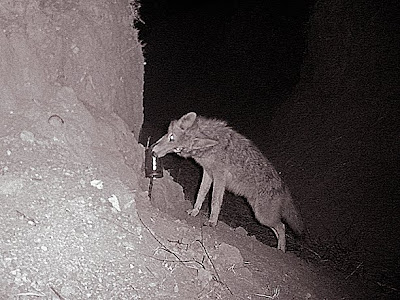 And at least one clever coyote tried to lift the can off of the rebar stake.

There's no telling how many different yotes we photographed, but it is clear that the gully is used by more than the pair.
Posted by Camera Trap Codger at 9:37 PM

Love the smell of rotting mackerel in the morning... It smells like camera trapping victory! (just ask Craig!)

There's something about coyotes that is so conducive to black & white.

I don't know if you've seen the Candian film about wolves called Cry of the Wild by Bill Mason, but one of the techniques he used to attract wolves was to take sardines and spill them out onto the snow. The oils from the canned sardines would mix with the snow, and the wolves would come in and "self-annoint."

Thanks for the link RM -- that technique actually works on a wide range of carnivores, but not all smelly compounds are effective. Some of my older posts show scent rubbing in gray foxes and mountain lions. One of these days I'll post Fred's response to a variety of animal scents and lures.