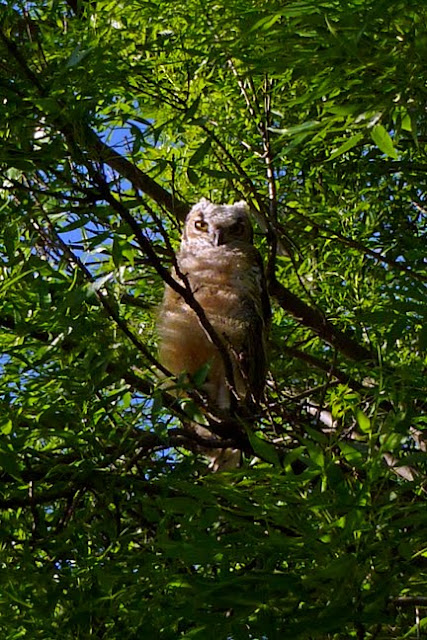 Last week was rendezvous at Chimineas.

It takes a grueling 7 hours, mostly on depressing Interstate-5 to get there, and if any of you remember the Carol Burnett show and Tim Conway's rendition of The Geriatric Fireman, well that's what I looked like when we arrived and I unloaded the car.

In a few minutes the scenery and a scolding kingbird were magically restoring me, and I paused to look up into the cottonwood next to the ranch house.


About 40 feet up there is a tangle of sticks, and six weeks ago it was crowned with the ear tufts of an incubating Great Horned she-owl.

When the wind tossed the branches, she would rise up majestically and peer out like an inscrutable Ahab weathering the storm. 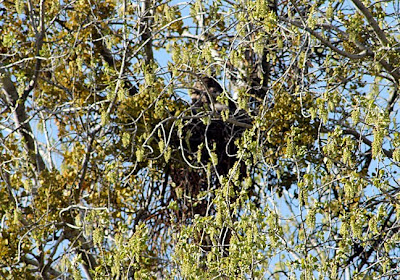 On this visit I was expecting to see a lot of owl traffic and one or two pubescent hooters, but when I binocularized the nest it was empty.
How could it be? If my calculations were right the youngsters should have been "branchers" by now.

Craig said the owls were delivering cottontails to the nest last week, but evidently they had flown the nest.  Damn!

This abrupt departure was a bit irritating, but not out of character.

The owls had denied me other pleasures of my second childhood. Though I have searched beneath their nest and neighboring trees I never found a single owl pellet or discarded bits of rabbit anatomy.

But I am grateful that the hooters nested smack in the middle of ranch headquarters, which is an oasis for cottontails and songbirds. 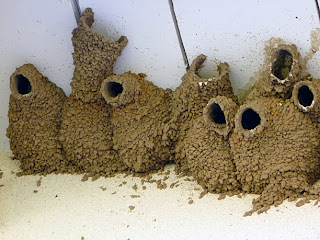 Cliff swallows under the eaves of the ranch house.

Tractor, ATV and car traffic didn't affect them, and their hooting has lulled me to sleep.

Some 80 years ago a soldier by the name of L.L. Gardner found a horned owl nest at Fort Riley, Kansas.

Though the nest was 43 feet up a hickory tree Gardner could see everything from the rimrock above, and made regular observations until, in Garner's words . . .


"Two soldiers casually riding by on horseback along the rim rock espied the young now grown large and bold and sitting up prominently on the nest.

"One of them ascended the tree, threw one of the Owls to the ground, tore the nest out of the tree and carried the other fledgling down clinging to his coat sleeve.

"Having photographed the pair they were about to dispatch them, when by an extraordinarily fortuitous chance the only other officer, Major C.C. Hillman, to whom I had shown the nest, rode by and rescued them.

"He brought them in to me and I hastened out to the tree nest in an effort to rehabilitate the family."
The nest was beyond repair, so Gardner located a large hawk's nest nearby, bundled it with cord and lashed it into the owls' nest tree.

"During this time the two nestlings sat on the ground beneath the tree and watched the entire procedure interestedly with their great yellow orbs fastened on the nest.  Occasionally they stretched their wings in a contented manner or walked around slowly."

"There was no protest on the rough passage up but immediately on being replaced in their new home rewarded this kindness by thankless hissing and aggressive hostility."

That night the parents visited the ersatz eyrie and fed the young, but they disposed of the dry grass with which Gardner had caringly crafted the nest.

So where did these pictures of the pubescent hooter come from?

At the end of the third day of fieldwork we rolled up to the ranch house, and RandomTruth spotted the young owl roosting peacefully. 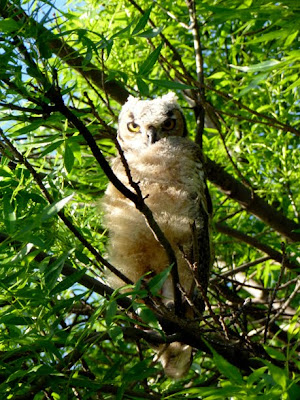 Great story Codge and nice photo of a beautiful young GHOW.
If looks could kill you would be dead man!

Codger...It is only a demanding drive form your home. From here on Gillis Canyon road...it is only 45 minutes...McMillan here.

My dad, Eben one time thought that the GWO in the Black Walnut tree fust downhill from the house was vacant. He climed up to have a look and was hit by two adult birds, in the hospital for a couple of days and spent a month recuperating....and he was a tough guy. Be careful..greg