If you have seen one redwood you have NOT seen them all.

This old veteran was hidden in the brush and almost escaped our notice.

Standing 20 feet high, with a dbh (diameter at breast height) of 12 feet, it was one impressive stump and deserved thorough exploration.

I climbed down through a rent into the cavity 4 feet below the ground.

Several passages of differing size led to the outside through the charred walls, and internal recesses reached deeply into the roots.

This was one helluva place for a camera trap; so we climbed through the slash back to the truck and returned with the gear.

Then it started to rain.

The stump was not much of an umbrella; the camera case was soon wet, and the camera lens fogged immediately.

I tried drying it, but it was too dark to see what I was doing. I gave up and hoped for the best.

Before continuing our rounds, we interred some pieces of road killed squirrel into and under the old stump's walls.


Later that afternoon I told Lowell about the magnificent stump.

"You know what they call them up here?", he asked.

"Goose pens. The old timers used to pen up their geese in those stumps."

The goose pen rewarded us with 107 photos of 9 species, and a success rate of 95%, which means there were few false triggers.

The deer mouse and wood rat of course were the first to show, but a hermit thrush appeared shortly after the alders dropped their leaves into the stump.

A Trowbridge shrew almost escaped my notice, but there it was, the voracious and fearsome midget mammal.

The brush rabbit's venture is a mystery. What was the attraction? It seemed a risky place considering the other visitors. 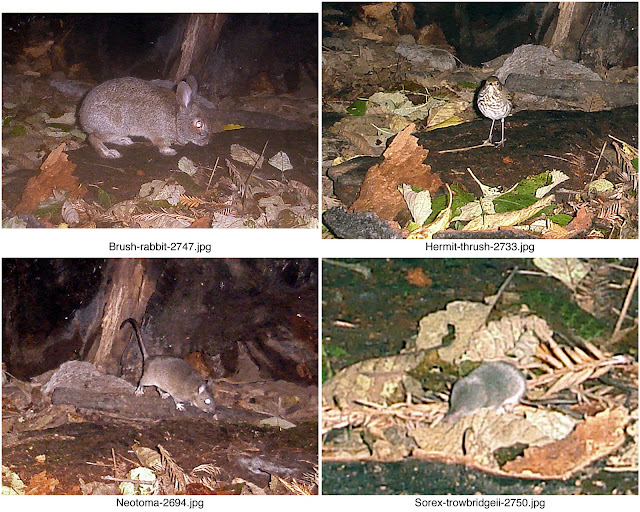 Of all the visitors, however, Fang the opossum spent the most time there (7 visits, 37 photos). 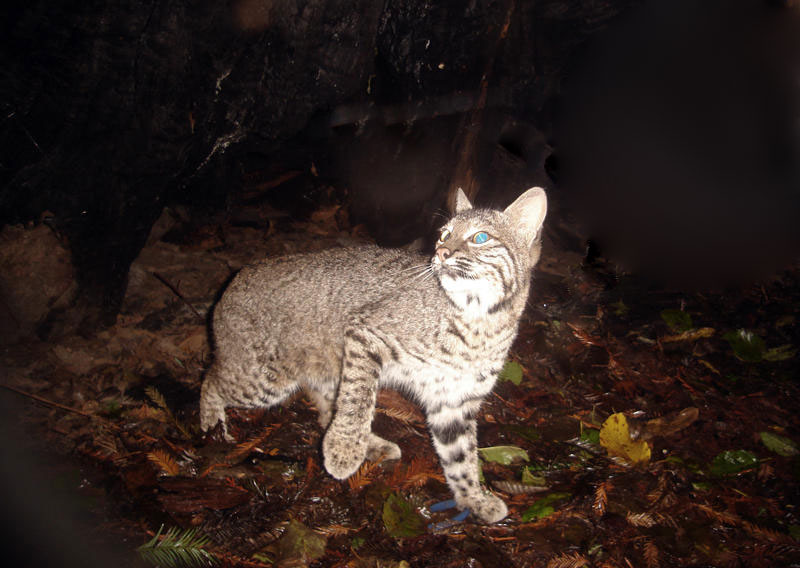 while a curious gray fox and a wet bear paused to examine the camera. 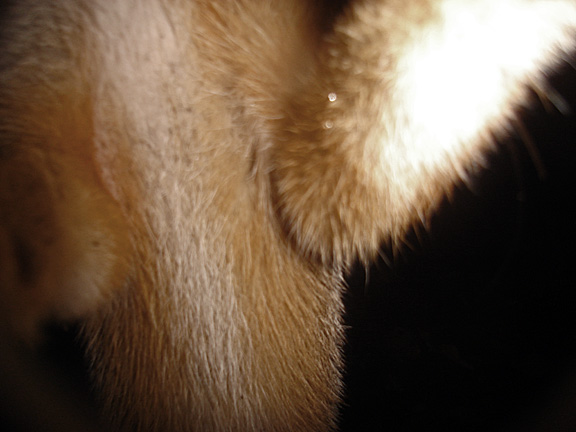 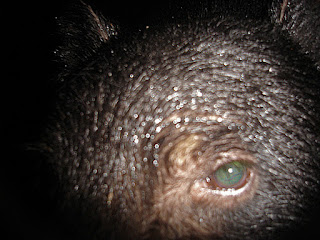 Though I like other images better, the shrew and the bear gave me the biggest thrill.

When I got home I realized I was missing my side cutting pliers.

You can see their blue handles under the bobcat's foot.

The blue plastic grips were all but missing when I recovered them.

There were rat nibble marks on the remaining traces of plastic, but the pliers still work.

What a bonanza! In my last comment I asked whether those were pliers. Sometimes I get so wrapped up in your pix I don't read all the way through. Sorry, Codge

What a great find! Sorry about your pliers.

Some great pics Chris. What camera/setup were you using for the bobcat picture?

All pics are from the same camera, my old standby -- a Sony s600. Will try one of the Panasonic Lumix models next.

The photos turned out great Codge.
Thanks for the memories.

The photos look better on the computer screen and wow what a bonanza Codge. You are good mann!