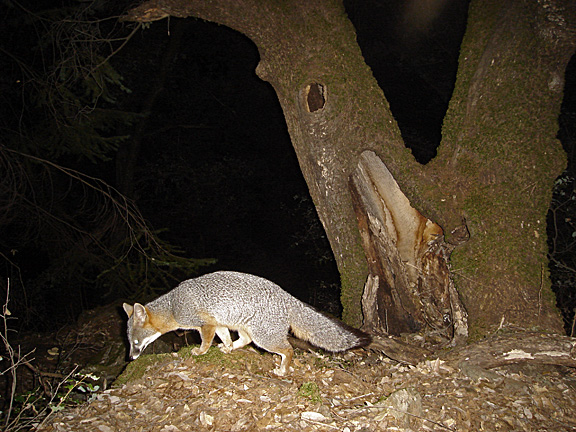 This may be the rascal that dislodged the camera in the tree cavity last week.

You may recall that finding the camera on the ground changed my game plan.

Before getting creative again and stuffing the camera down the cavity, I had to see what creature had sent the camera tumbling.

A bear was the first thing that came to mind, but maybe a ringtail chimney- stemmed the hollow trunk and jarred the camera loose.

Even a spotted skunk could have knocked it down.

These were the more exotic possibilities, but more realistically a rotund wood rat might have pushed it aside while trying to squeeze through the gap.

I learned last Saturday that gray fox and wood rat were the only ones to show.

Look at this odd posture.

It resembles the scent-marking handstand done by a number of carnivores, including some civets, mongooses, and the stubby-legged bush dog of Latin America. 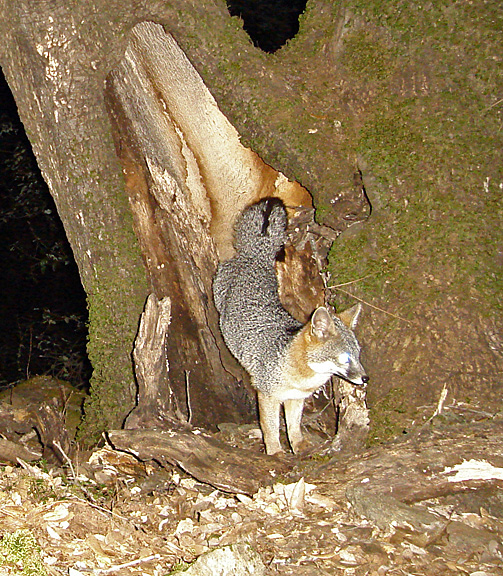 Even the oddball dog has been known to defecate in a handstand, but I never knew gray foxes performed this charming maneuver.

After that the camera stopped taking pictures. When I found the camera it was ajar and no longer aimed at the hollow tree. 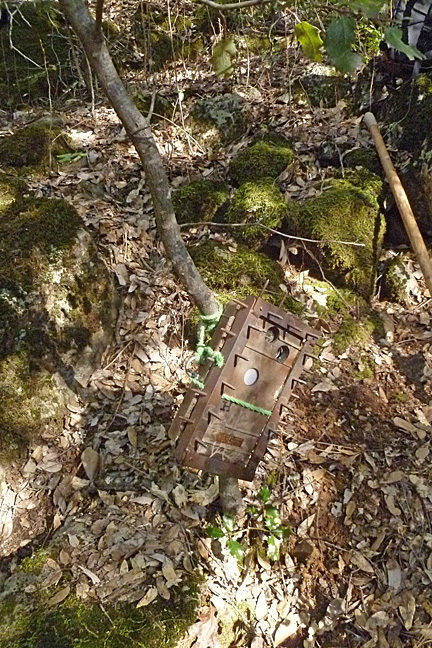 I can only conclude that the fox was the camera bully.
Posted by Camera Trap Codger at 9:03 AM

That's funny! Looks like you need a camera pointed at your camera to watch that fox's cam-opening tricks!!

That's a BBC clip of one doing this behavior. I'm a bear lover, and have been doing alot of reading about black bear marking behaviors, and this video was brought to my attention.

Also, how do you know this is a male?

Could you smell it in the air? Right now in NY our red foxes are mating, and I feel like everywhere I am (in the field) I can pick up that musky scent on the air!

VERY neat pics! I'm really hoping to get a gray on one of my cameras this spring.

What an outstanding bit of behavior caught on film!

I'm not sure it's a male, Alyssa. Just assumed a female would be better behaved. Yes, our giant pandas also marked in a handstand at the National Zoo.

Awesome captures!! That is so funny. I've watched a lot of Gray Fox and never saw them do that..LOL

Hmmm, yes, I've taken many a picture like that closeup while trying to photograph my endlessly inquisitive foster kittens. I'm not surprised your camera was ransacked!

That was not the culprit I was imagining. Did it really get all the way up in that hollow to knock the camera out? Maybe the Codge needs to get that camera a little further up into the hollow.

Room with a view and struck out are the same location? Did you change the placement of the cam, because I thought the cam was quite a way off the ground in room with a view. Looks like the same tree maybe. That is why I was suspicious of a fox climbing eleven feet up a hollow to displace a camera.

The fox could get to it from the hole in the trunk 11 feet up. It was just stuck in place within reach. It could climb up the trunk, but could not reach it by going up the cavity.

Wow. Super cool. V. interesting about fox behavior, and I LOVE shots like the last one it took before the camera was repositioned. I've seen "last shots" cameras took where you just see a screen-filling pair of bear eyes and forehead. And then nothing more. Except for the unheard camera screams echoing into the night.

I think you're right.

Lady ringtailed lemurs also like to indulge in a bit of handstanding.
I'm currently trying to find out whether dwarf mongooses use handstand marking to convey information about body size. This involves a lot of crawling about presenting disinterested mongooses with stinky little swabs stuck to kebab sticks at varying heights. Actually, thinking about it, the less said, the better.

I continue to be amazed about how your camera-trapping brings the secret world into our lives. It is truly inspirational and I am addicted.

I am, in particular, fascinated by your pictures of the "smaller" mammals and the insights the pictures, and your methods, bring.

Thanks H99. I must be doing something right.

Lynda, interesting experiment. Are you able to control for individual/sex differences in the scent signatures? Are you testing for differences in distance detection as a dependent variable? Always found this topic fascinating.

what a handsome fellow