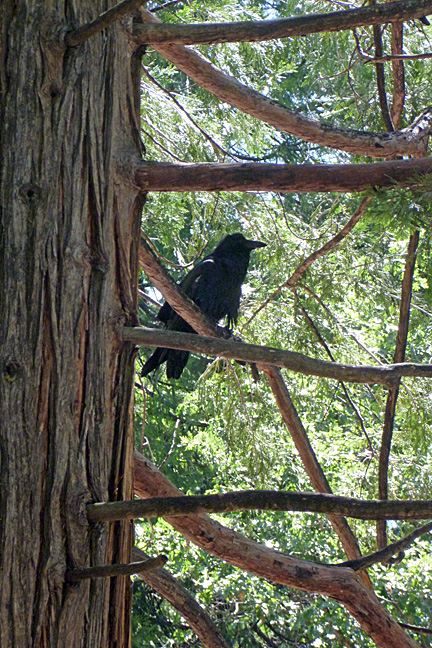 "They still visit," says Richard,  "and they grumble on the phone pole. But they don't hang around like they used to".
Posted by Camera Trap Codger at 9:19 PM

Clever corvids. When I lived in Albany, CA, I made the mistake of leaving peanuts out for the Scrub Jays. When I stopped, they figured out where I slept and hammered on the bedroom window at 7 AM. So I started again.

This weekend, there were many ravens flying around the Dipper Ranch in the Santa Cruz Mountains. One evening, I counted 53 hunting through the grass on a nearby hillside. I could not detect a carcass, another food source or anything else different that attracted so many unless it was something to do with the thermals above the grassy hills this hot weekend (lots of seagulls also). I never see this many ravens all at once but I am reading Mind of the Raven by Bernd Heinrich and he talks about large night roosts of ravens in his research in Maine. Maybe the ravens knew I was reading the book and decided to give me something unusual (in my experience) to think about as they are clever birds.

I'm sad that Richard and Mrs. cut off the ravens' treats...

Have you read a recent account of crows somewhere in Japan picking up deer pellets and putting them in the deers' ears, as if just for fun?

Clever corvids. Yep, they were trying to train Richard too, just like those scrub jays, Hugh.

Cindy, might they have been eating grasshoppers or grass katydids? Heinrich is a terrific writer -- his father was an amateur but heavyweight ichneumonid wasp taxonomist.

Rich, thanks for bringing Poe to the forefront.