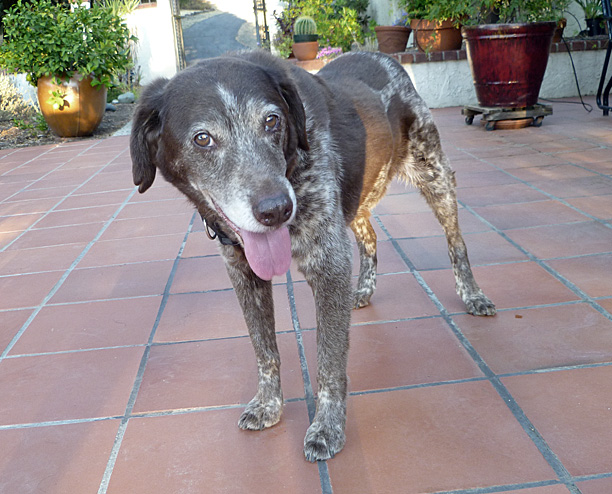 It was 100 degrees outside when I got out of the car and a strange dog crawled out of a hedge next to the driveway.

He wore a dusty black collar without identification.

We'd been gone for only two days, and someone had discreetly dumped the dog on our quiet driveway.

He stood there panting noisily and looking at us, and I felt resentment.

I didn't blame the dog.

He was gray in the muzzle, had bad breath, a torn ear, and stiff back legs.

His coat was mixed with the thick dusty undercoat of winter.

But he had clear eyes and a good disposition.

I gave him water and kibble, thinking about my schedule and this new responsibility.

One thing was certain. If this dog decided to hang around it was going to have to sleep in Fred's outdoor dirt bed under the hedge.

And sure enough, he was there Saturday morning, wagging a bobbed tail that looked like a fat coin purse.

I fed and watered my new "Buddy".

Then he stabbed me with his forefoot.

"What? You wanna be brushed?"

I could tell it was a rare pleasure, and the old hair came out in gobs.

There was more of the look and the squeak-whine.

"Now what? You want a massage?"

He loved that too.

He followed me to the chair on the back porch and put his head on my knee.

The dog was a gentle charmer. I fed and brushed him, and massaged his neck three more times that day.

How could someone abandon a sweet trusting dog like this?

Many years ago someone had paid to have him castrated, and he liked being put on the leash. Obviously someone had taken him for walks.

He was an old person's dog. That's my guess, but who knows the owner's story? It may be even sadder than the dog's.

I put a notice in a local community forum, but no one claimed Buddy.

Butte County Animal Control said they would pick him up on Monday.

I hated the thought. Whatever was in store for the dog, I would to treat him well during our brief time together.

On Sunday Buddy stood stoically as I sluiced him with cold water and lathered him with shampoo. His pleasure was unmistakable when I rubbed him dry.

In two short days Buddy was as attached to me as I was to him.

At dusk he came to the front door to look in at us as we watched TV. Fred was sleeping on the floor. Then he ambled off to his dirt bed.

On Monday morning the Animal Control truck arrived, and the dog knew something was about to change.

I sat down with the warden and waited for Buddy to approach.

"I'm sure I can find someone who will give him a good home. I just need more time".

"Do you really want to know?" asked the warden. "A lot of people regret it when they find out".

He said he'd make a note in the record.

Buddy allowed himself to be collared, and the warden lifted him into the traveling compartment.

And so he surrendered himself to yet another person. A gentle old dog. Life was not in his control.

What would happen to him next? How could such an animal be found unsuitable as a pet?

It all made me very sad.

As soon as they left, I took Fred for a three hour walk on the flume.

We cut the usual spectacle with Fred yodeling in anticipation as we drove up Humbug, and he did his usual crazy stuff, racing back and forth, leaping wildly into the water, barking, and surrendering the stick only on his terms.

Dog-youth looks like it will last forever, but of course nothing does.

Fred and I live on different time lines, but he's slowing down and catching up with me.

We'll converge in our dotage, but we're going to stick it out until the end.

And I'm still hoping . . . . hoping the animal control folks in Oroville will have the wisdom to see that old people need old dogs like Buddy.
Posted by Camera Trap Codger at 8:44 AM

OMG where's my kleenex. I'll be thinking about this all day... Wouldn't Fred like an older brother?

Brilliant, sad, unforgettable...What a touching account. You outdid yourself on this one, without even trying.

Rich (wiping away the tears)

You may be right about the owner's story. His owner may have died, and the family just turned the dog loose. We get a lot of our older animals at the shelter when people go into assisted living or die and the families can't or won't take the pet.

Thank you for caring for him. Whatever may happen at animal control, it will still be better than dying slowly of starvation in the woods.

A sad tale but one that happens here too some 12,000 mi away. We have had roosters and peacocks show up but no pooches. If there were no cassowaries around, I’d be happy to look after Buddy. In any case, he would probably show no interest in cassowaries at his age.

Makes you wonder about some people.
D

What a sad story I hope he finds a good home. I can't imagine dumping my sweet kitty off in someones driveway he's my buddy. Or an animal left in my care from a retaliative for that matter I just don't understand how people can be so cold.

Thank you for being kind to him, and for sharing his story.

Life is not without pain. Decisions come hard, but must be made. Thank you for giving "Buddy" respite from the world, and thank you for sharing his/your story,

Yeah..I think Fred needs an older brother. I hope Buddy comes back to you.

Buddy's been adopted by a kind dog lover in Magalia, and gets a vet check soon. He has heart worm and catarracts, but he still has a great disposition.

I'm glad such a sweet dog was able to find a home for his final years. Humans have free-will to control their lives, but animals do not. In this case, good-hearted humans did the right thing. Bob Vincent

So glad to hear Buddy is getting a chance at a pleasant life--you shared his story with such love and care that I had to check back to see if there was a happier ending. Thanks so much for the update--and for caring so sweetly for him.

Codger I haven't had so many tears rolling down my cheeks since my mother died. You are obviously a very compassionate human and you proved it here. Good job!