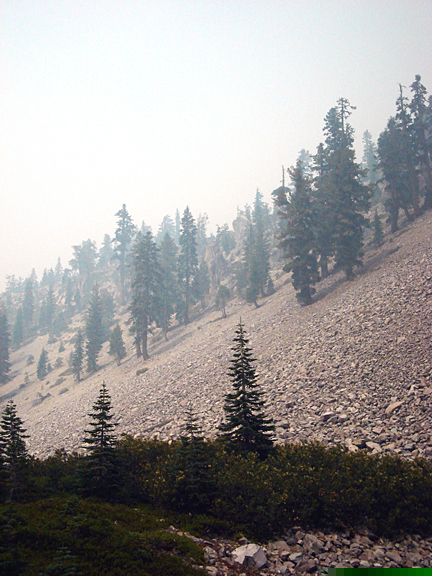 There's a fire in the mountains about 50 miles away. We're not in danger, but the smoke plumes over us during the day, and flows down the canyons at night. The Sacramento valley looks like an inland sea, the hills are gray, and the house smells like chipotle, which isn't bad . . . for a while anyway.

I woke up at 3:07 last night with an acrid presence in my sinuses. Couldn't sleep. The security light next to the house kept going on and off -- thirsty skunks at the water trough, I guess. Then came the smoky memories . . . .

A sunny spring day in 1950, Lafayette Elementary School, San Francisco
I'm looking towards the classroom window and freedom outside, smelling burning eucalyptus leaves in Golden Gate Park. It's beautiful outside, and I hear the cries of peacocks in the park . . . why am I being held captive? Then the teacher calls my father for a meeting. Apparently he is clueless. Unless he can influence my behavior, she dreads another week of school. She advises him to lower his expectations for my future. My mother says he was rather glum that weekend.

1952. San Francisco. Geary street between 40th and 39th avenues
We hear the fire engines before we smell the smoke. Burning linoleum. When the firemen arrive, my friend Clayton, who lives in the burning house is dancing and leaping for joy. He started the fire. Luckily the fire department puts it out before it reaches the basement, where we used to play with a box of machine gun ammo left over from the war.

1958, A Thanksgiving fieldtrip to Bridleveil Campground (now closed), Yosemite National Park
A field trip for science nerds--student members of the California Academy of Sciences. It is cold, so cold that my fellow nerds are raiding my plant press for newsprint to insulate their sleeping bags. This is irritating, but I can't complain. My bag needs insulation too. We also warm our feet in front of the campfire, and I am the only one who doesn't heed the smell of burning rubber. It is hard keeping up with my friends wearing boots with curled soles.

1982, December. Royal Chitawan National Park, Nepal
The sun is a red rubber ball. At 3:00 PM there's enough smoke in the air that you can look at it without burning holes in your retinas. The villagers are lighting fires in and out of the park. Not to worry, they're not wildfires. Indian rollers and drongos follow the flames and glean smoke-dazed insects with frazzled wings. The firing of the terai is an ancient rite that's good for ungulates. In a few weeks chital and great one-horned Asian rhinos, not to mention cattle and buffaloes will be munching on the greensward. Burning grass smells sharp, but burning sal (Shorea robusta) smells like incense.

c. 1985. Chitawan again, Smithsonian-Nepal Tiger Ecology Project
Sweating in my skivies under a mosquito net, upstairs in a wooden bungalow, I am a dysenteric zombie trapped in the stench of burning elephant dung. There is no escape. The mahouts burn green dung balls as a nightly ritual. It's a sanitary practice. Like Gunga Din, Bishnu delivers electrolytes and bottles of water three times a day. I make dozens of trips to the loo, day and night. A Swedish tour group sees me creaking down the stairs in my stained skivies. They think I'm a druggie. I don't care. My only goal is to get to the loo without you-know-whating myself.

c. 1990. near Bangalore, India
Riding in a taxi with the late "Doctor K" (for Krishnamurthy), I scent something familiar and appealing in the air. "Doc, is that hamburger I am smelling? Doc laughs wildly in his falsetto and then replies, "No, you are smelling a crematorium".

At 4:30 I am staring at the vague movement of the ceiling fan in darkness. The redhead asks if I want the radio on. I do.

The BBC reports the state of the world. Pavarotti has died and Putin is selling arms to Indonesia . . .

There will be no more double espresso iced coffees with lunch.

[August, 2012: Since writing this I have fallen back on having an iced espresso after lunch, but now I limit myself to a single.]
Posted by Camera Trap Codger at 8:08 PM

And on August 20th, while cam trapping in the Tehachapis, my jeep caught on fire. Needless to say, I moved like I had downed 20 espressos. A first "adventure" I hope to never repeat.

This post really made me laugh Codger. Thanks buddy!