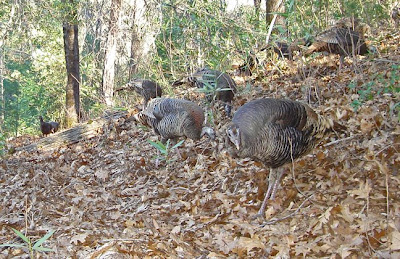 This is the area where the bobcat passed a few days ago.

Turkeys are an alien (=introduced) species in California, but bobcats and other predators have accepted them without prejudice.

The cam took 0.9 pictures/day here in 12 days, but the majority of the traffic was from this flock of hen turkeys and a couple of squirrels. 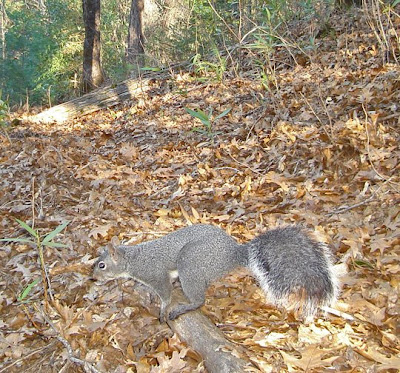 When I scoped these pictures out on the trail it was a ho-hum moment.

A couple years ago I would have moved the camera to a new location.

But sooner or later something less common will make an appearance.

So I'll just wait it out a bit longer.

I am not growing more patient. It's just that I have enough cameras now to work several locations at a time.
Posted by Camera Trap Codger at 8:21 AM

Oh, the feeling of having many cameras. It sure takes the pressure off when setting the camera for certain animals.

I have 5 cameras in the woods where I might get a picture once if I'm lucky, 2 are aimed at trees that beaver are trying to fall, but a good photo is well worth the wait. Can't do that with just a couple of cameras.

Good luck on the trail, bobcat, squirrel and some turkeys are a perfect start.

I just bought my second camera, so am working my way towards your's and Cliff's feelings of multi-camera coverage contentment. :)

I also just found the access trail to the Forest Service land between our place and Yosemite. I.e., 2 cameras may not be nearly enough...

That's the problem from my wife's view. Camera trapping can become a bit of an addiction. I enjoy all aspects of it, and making new cams and refurbishing the old bear-beaten veterans is particularly satisfying. And there's nothing to compare with viewing the pics in the field, especially when you get something unusual.

On the turkey problem, good luck to the predators. Those turkeys will clean out the Nedubas and camel crickets ( the the rest of the ground fauna) quicksmart. Good luck to the Bobcats.