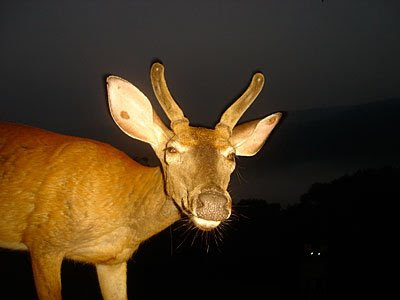 Here's a real life caricature of a yearling white-tail.

It's a camera trap shot taken in West Virginia by my good friend and native Montanan Carl Hansen.

Carl's a photographer, and he used to travel with me in SE Asia.

He took a lot of pictures of me running around with an insect net.

In my less active moments his pictures showed me looking a bit like this deer.

Being playfully inclined, I decided to photograph Carl's activities.

He was fond of wearing rather unusual field garb, and that would have sufficed.

But those pictures were already on the internet.

So I settled for taking pictures of him only when he was sleeping in broad daylight.

In truth, we all slept in broad daylight. It was hard to sleep at night in a pool of sweat under an insect net.

Yea verily we cat-napped by day. We nodded off to jet lag, trains lulled us into dreamy slumber, and heavy rice and curry lunches knocked us out.

But I staved off Morpheus longer than Carl, and got the pictures.

He never knew it till we got home and the film was developed.

Those were good times.

And we're still good friends, or he wouldn't have sent me this photo.

Carl's going to retire in just a few days.

HAPPY RETIREMENT, buddy.
Posted by Camera Trap Codger at 9:43 AM

Are those some white spots on my computer screen or a set of eyes in the lower right corner of the photo?

That's another deer in the distance. Good observation!