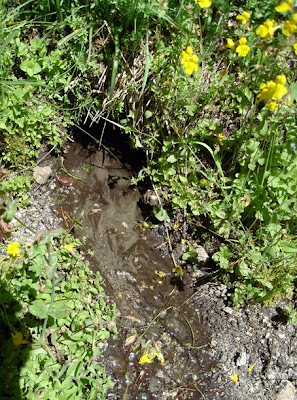 As far as I can tell, mountain beavers don't mind watery tunnels.

Most of their burrows are in relatively moist soil, and on slopes where soil drainage is good. 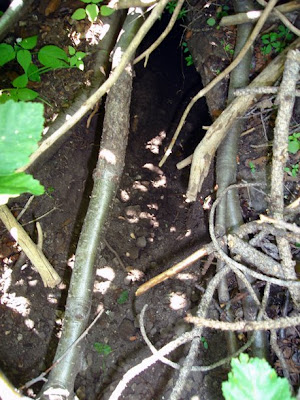 But in some burrows water trickles freely. 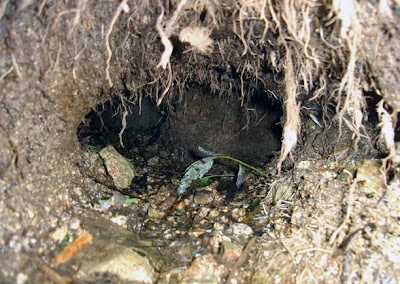 The green vegetation inside indicates an active burrow.
A new acquaintance in Sierra County showed me this tunnel system, where at least some sections of the burrow rest right on the water table and just a few inches below the surface.

These little charmers do some serious root grazing to clear a passage right under the sod, and I imagine the remaining root mass gives them a good coat brushing every time they scoot down the tube.

My friend discovered this colony in an unusual way.
He was driving up the highway when he saw a bush making its way across the asphalt.

It wasn't on fire, but it was a strange vision all the same and it led him to a small Aplodon colony just above the road shoulder.

The rodent was removing bush lupines across the road and hauling them to its burrow on the other side.

Earlier this month I asked a Plumas County resident if he had ever seen mountain beaver.
He paused a moment and said, "Yeah, and I shot it".

It was cutting his bean plants and hauling them away.
Since then the colony on his property hasn't gotten into trouble.

But back to watery subways.
When I was camera trapping for these fellows in Point Reyes National Seashore (check here) I got the impression that the most active burrows were near wet lush places.
In early summer the active burrows were widespread at the bottom of the ravine.

They riddled moist soil and boggy areas beside springs, and above ground the vegetation was green and rank.

When the vegetation had dried up and much of the ground was drier in August and September there were fewer active burrows to be found. 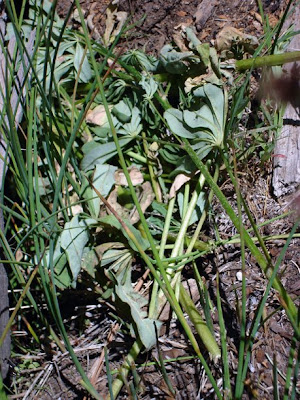 Curing haystacks (in this case lupine)
are a sure sign that Aplodon is working the area.
Posted by Camera Trap Codger at 5:32 AM