A fleeting glimpse of tail 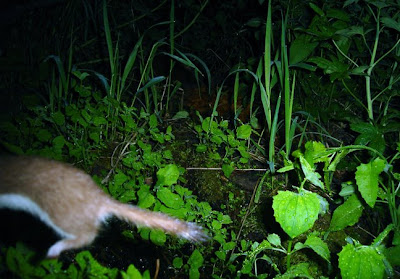 A fleeting glimpse of tail is sometimes enough to identify a faceless subject.

In this case it was Herman the Ermine, also known as the short-tailed weasel (Mustela erminea).

It's a new species for my camera trapping life-list.

The location was the bank of a steep falling creek that feeds the Yuba River's north branch.

Weasels work creek bottoms on their foraging rounds, but I attribute this picture to serendipity.

Here's a full-frame camera trap view of the site on June 21 when I set the camera. 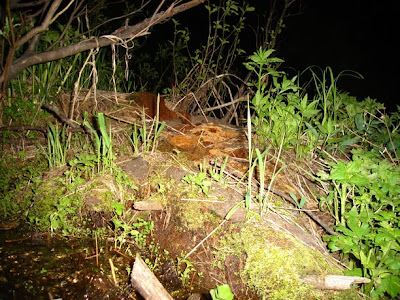 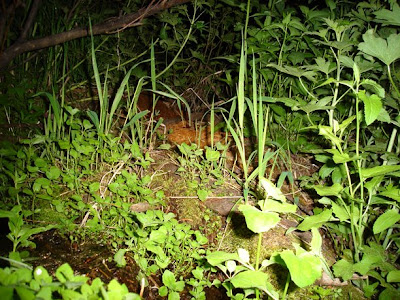 Yes, growing vegetation can be a problem when you leave your cameras out for even three weeks.

It took me an hour and a half to find one of my other 5 cameras in the area.

My GPS told me I was on top of it, but it wasn't there until I pushed through a patch of Delphinium that had grown up around it.

The other cameras operated for a total of 96 camera trap days.

I got lots of pictures of deer mice and chipmunks, but no mountain beavers climbed the alders to reach the apple and birch scent lures I had painstakingly attached.

Herman the ermine was the only picture that stirred me, but only a little.

I'm too old to attempt a back-flip for a fleeting glimpse of weasel tail.
Posted by Camera Trap Codger at 8:02 AM

Great shot of the weasel's tail. He seemed to be in a hurry. Have a great weekend.

Wish we had weasels around our place. Weasels that eat moles. Lots and lots of moles...

Totally know what you mean on the vegetation growth! This year has especially been crazy with the extra Spring rains here in California. In some of my pond shots the cattails grew 2 feet in 1 month!

A little tail is always good!