Deportation of another little visitor 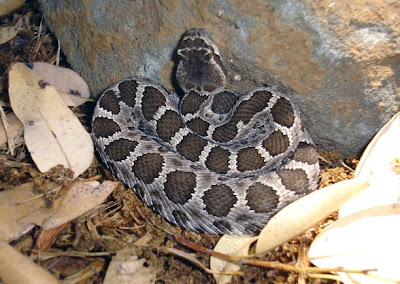 He was minding his own business and so was I.

He was a baby, barely 14 inches long, waiting for the lizards to become active.

I was searching for Fred's dog logs around the garden for proper disposal further away.

I saw him just as I stepped over him. Whoa!

I got my camera.

He was leading a group of undergraduates on a field trip to Marin County (or maybe it was Napa County), when the class stumbled on a very peaceful rattlesnake on the trail.

It was completely motionless and stretched out like a crooked stick, and its tongue wasn't to be seen.

The professor studied it for a few moments, and then slowly reached down.

No one knew what he was doing until he pinned the snake by the neck.

He impressed the hell out of us.

This little guy also looked asleep, but his tongue was working. He was peaceful, but he wasn't asleep.

I got a gallon plastic bottle and prodded him into it with a stick.

Then I released him in the woods half a mile away.

I picked the place carefully because I like rattlesnakes.
Posted by Camera Trap Codger at 8:26 PM

I do too, great picture.

Love the picture but I wouldn't want to step over this guy. Have a great day.

I really like the picture. Was he like that with his head up on the rock when you first spotted him?