Bob kittens on the trail 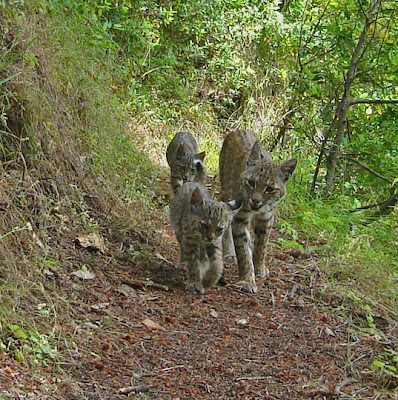 We're back in Marin County, where this bobcat family walked past the cameras on July 15th, 17th, 18th, and 24th.
I got 15 other pictures of single bobcats, mostly the usual butt shots.
Study the pictures above and below and you can see that the larger kitten is behind, and the little one is beside its mother.
I'd wager the bigger one is a male, and the runt, a female. 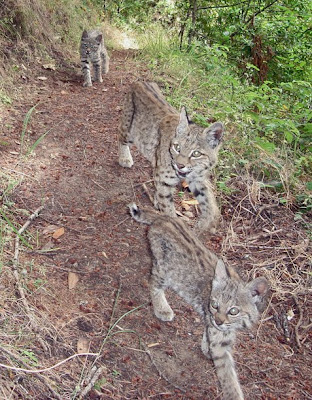 I was about to conclude that there were two kittens in this litter, but then I examined the picture below. 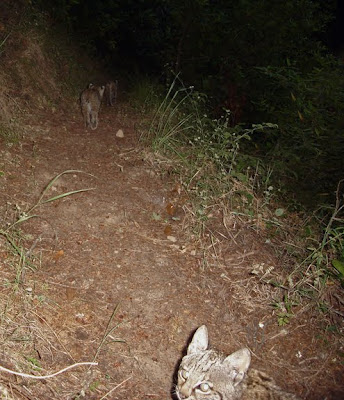 It looks like the baby-faced cat in the foreground may also be a kitten.
Two other kittens are farther up the trail.
If I am right, there are three in this litter.
By the way, this particular set had two cameras.
One was mounted on a Douglas fir right next to the trail, and the other was mounted on a metal post beside it and slightly higher.
The cams took different pictures of the family, which strikes me as a little odd.
During walk tests, their sensors detected me 30-40 feet away.
So I expected both cameras to take pictures of the same events, which is what usually happens.
Instead, one camera would miss the family, and the other one got the picture.
In one case the second camera had two blank pictures while its mate had a cat picture.
It makes you wonder about camera placement, but all the same, I'm glad I had two cameras there.
Posted by Camera Trap Codger at 5:01 PM

These bob kittens are so cute. I'm glad you had two cameras also. Have a great day.

Once again you have proved that you are the man. Outstanding photos of something that would not be seen any other way.

Do you problems with camera theft? I worked on a research project once that involved camera trapping. One of the rules for setting cameras was to not place them along trails due to theft issues.

I too have lots of bobcat butt shots. All my color shots so far, in fact. Glad to know they aren't just conspiring against me.

They don't look like they're from the same litter...could the large one be from last year's litter? The faces seem to me to have a different maturity appearance...I thought initially they were mother and kits, but there isn't enough size difference. So...maybe a different litter?

Going to be hard to top that photo.

Thank you for considering!

Keep up the grreat work. Really appreciate seeing your images especially since I live in Marin and one who really wants to celebrate the local wild in our midst!