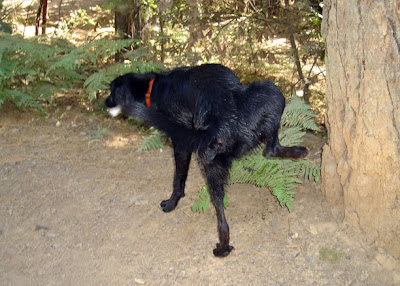 Fred crossed the Rubicon. He pees almost exclusively with "the leg-lift".
I saw the new move months ago, but until this week he peed mainly while squatting.
Now the leg-lift reigns supreme, and a macho version at that.
Look at how nicely he cocks his foot aiming the stream away from his body.
Only a two weeks ago he was peeing on his front leg whenever he tried.
"This is the son we never had", I beamed to the redhead.
"Yes, I'm tired already, and it's time to get his nudicles removed."
The thought of it made me feel faint.
I mean, castrating our son?
I threw a stick into the flume and Fred did a flying Wallenda into the water.
I'll worry about our son's nudicle-ectomy later.
Posted by Camera Trap Codger at 6:02 PM

I've read the leg-lift is a mostly learned behavior. Exactly what have you been teaching him, Codger?

And only a proud Papa would say of his dog "Look at how nicely he cocks his foot aiming the stream away from his body."