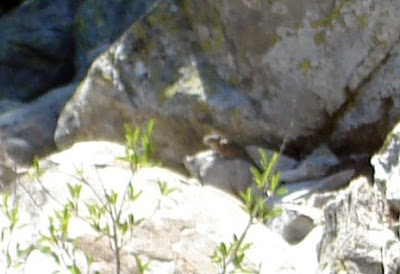 Little Chief Hare, monarch of the mountains
I found them in Sierra County.
That's the best I could do with my point-and-shoot camera -- the same one (Sony s600) I use in the camera traps.
To see how cute they really are check out Bill Schmoker's images here. 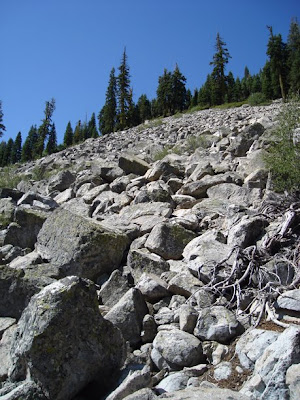 Little Chief's rugged domain
My plan was to search for Little Chief Hare by skirting a large talus slide just visible through the red firs on Scenic Route 49.
The women, and especially the g'daughters  were keen to see the Little Chiefs, but not if it meant climbing a talus slope.
They had their own plan, so they sent me on my way with a pack lunch and Fred.
Alder thickets -- potential mountain beaver habitat -- threw me off course before I reached the rocks.
I took off my glasses and waded into the tangled sticks looking for Aplodontia's nipped twigs and burrows. 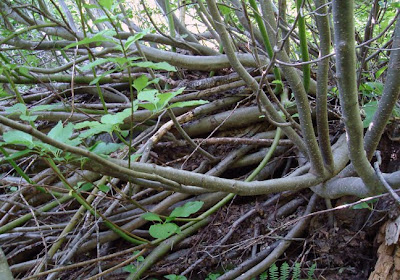 Snow pack had laid the alder stems low,
and newer shoots tried to correct the course to the sky.
The plant community, slope, and soil moisture seemed adequate to support mountain beavers, but there was no sign of them.
I headed up the hill wondering if talus under the soil prevented their burrowing.
We were in the middle of the rock slide when I heard the penetrating announcement . . .
Pip-squeak . . . . pip-squeak . . . .
Little Chief had us in his sights, and bolted his head forward with each couplet.
A second Chief protested lustily and disappeared into the rubble as we approached.
We listened to it sounding its alarm deep beneath our feet.
Onward and upward.
Fred proved himself a surefooted talus climber, but he was the only black body on the white reflective granite, and the length of his hanging tongue started to worry me.
He didn't want to drink from my hand. He wanted water as it poured from the bottle's spout.
My GPS showed Deadman Lake and Peak somewhere above us, and I decided to go for it. 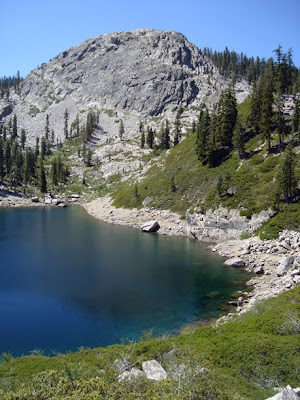 Deadman Lake -- one of the northern Sierra Nevada's glaciated lakes.
Reaching the lake was kind of a Lewis and Clark moment.
Fred cooled off, we ate lunch, and I studied my GPS topo to plan the return trip. 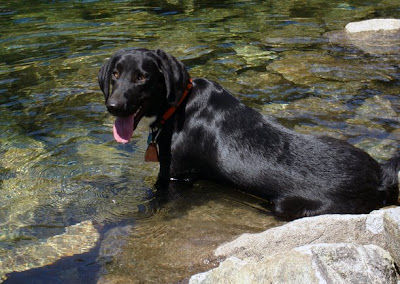 Fred cooling off with bear bell in full view.
So we found Little Chief Hare, navigated to Deadman Lake, and made the return trip down a steep ravine at the east end of the talus.
The round trip was only 2 miles and a climb of about 800 ft.
It was a good hike, but I think camera trapping Little Chief will be hard.
Heat and updrafts will trigger the sensor as soon as the sun hits the rock. I can expect hundreds of pictures of rocks.
But it's still worth a try -- next year.
Posted by Camera Trap Codger at 9:12 PM

Water level on that lake is sure down...

You must know it then. This being my first visit, I have no reference for comparison, but understand it was a great place for fishing until the 4WD road gave out. Now the golden trout there are even bigger they say. I takes a determined angler to reach it on foot.

No...just looking at the photo. You can see the line of normal water level significantly above the actual water level. It's all brown - no vegetation. It looks like about 6-10 feet, but without a size reference it's very hard to tell.

My son brought home some photos from the Sierras a long time ago (long story). One was of a pleasant looking valley...when you looked a bit closer, you could see his compadres on horseback at the bottom of the valley....little teeny teeeny specks. Gave the size of the pleasant valley a whole new dimension - literally!

I love Pica. I used to sneak up on them on the skirts of Mt. Hood when I was a fire lookout. I got within 20 ft. of one and got to watch it stretch out and put everything it had into the alarm call when it figured out what was going on.

I thought that the Golden Trout were more limited in their distribution to high mountain areas
of Tulare and Fresno County?

Agreed, pikas are really neat. On golden trout, I was told by a local that Cal Fish & Game planted the goldens in Deadman Lake some years ago, and that now they a really BEEEG!