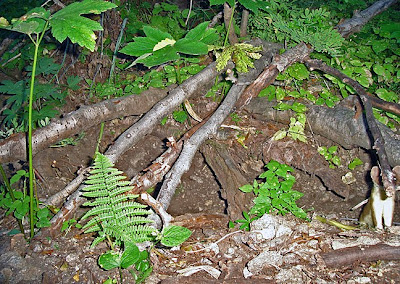 It's always a thrill to get a weasel, 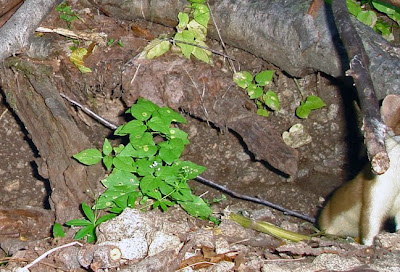 but I was looking for Aplodon (= mountain beaver).
West branch of the Yuba River, Sierra County, California
This wasn't the lush alder thicket I had worked back in early summer.
The undergrowth was trampled and dry.
Deer had broken the dense clumps of Delphinium, and only a bear could have demolished the red fir log I had used a few months ago as a walkway into the thicket.
But I found the camera trap right away, and expecting an assortment of birds and small mammals I opened it to see if the camera still had power.
Damned if the batteries didn't work!
The next move in the ritual is NOT to start viewing the pictures.
First I check the number of photos to find out if the catch was good or bad.
What!  Only 4 photos?
That explained why the batteries still had power.
Yes, I was pleased to get the long-tailed weasel.
It is evidence that they forage in mountain beaver burrows, and you have to marvel at a predator that takes down prey 2-3 times larger than itself.
But how could this runway and burrow yield so few photos in a period of 2 months?
Last year the burrows were teeming with activity.
There's always something to learn  from this game and here are my thoughts.
First, I don't think the weasel cleaned out the colony. 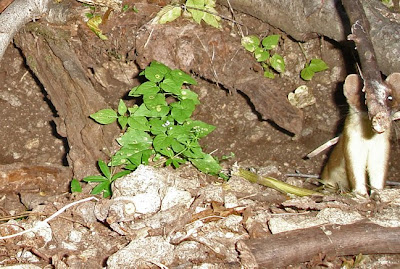 After giving it some thought, I remembered camera trapping  in Point Reyes National Seashore  a couple years ago.
Aplodon burrows that were active in early summer seemed abandoned in late summer.
In both areas the active burrows were damp and the inactive ones were dry and dusty.
When the soil dries up mountain beavers seem to move to areas where the soil is moist.
In winter and spring when soil moisture is more uniform they move back into the old burrow systems.
That's my working hypothesis.
Posted by Camera Trap Codger at 9:01 PM