The little guys who also show up These are pictures of "incidentals", the little guys who also show up. Aplodon was my target species at this set, but there were several passersby in the vicinity of the rodent's burrow. I tentatively identified the creature above as the water shrew (Sorex palustris), and the brown-colored one below, if you can see it, I am tagging as the vagrant shrew (Sorex vagrans). As I mentioned though in the workshop summary (a couple posts back), these are tentative identifications. Three of us photographed long-tailed voles (Microtus longicaudis). They were all filmed moving about day and night in the alder thicket. Of the birds, this yellow-rumped warbler is unmistakable. The other photo of it revealed fewer diagnostic features. Though wood rat pellets and cached cones were abundant in the granite recess of the following camera set, the mouse was the only visitor. It could be a North American deer mouse (Peromyscus maniculatus) or a brush mouse (Peromyscus boylii). Based on coloration (not well rendered here) I am guessing it's the latter. It was photographed at 6000 ft on a large cliff face near Yuba Pass. 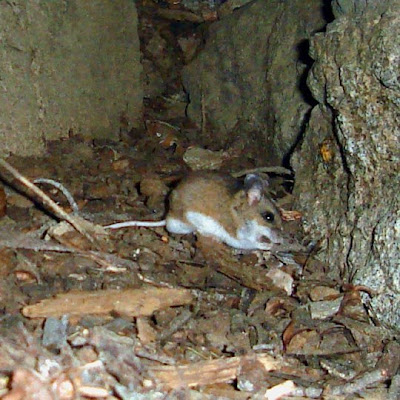 What fun! I think it's way cool what you are doing for kids, science and people who just like to know stuff (amature naturalists?) It must be awesome to know you are making changes in what we know of the world and in how we see it.

Thanks Beverly. This is just the mammalogical equivalent of birdwatching.