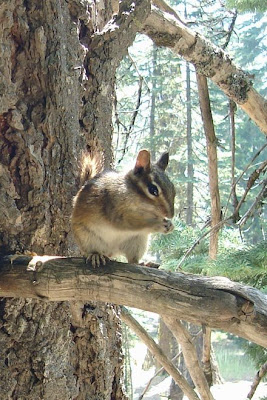 We saw plenty of shadow chipmunks (Tamias senex) during the camera trapping course. Between northern California's Eel and Klamath Rivers shadow chipmunks live close to sea level, but in the upper reaches of the Sierra Nevada's Yuba River we found them at 4000 ft. They've been recorded as high as Donner Summit (7089 ft).

This chipmunk shares its range with 8 other species of chipmunks, but its choice of habitat and differences in behavior accords it relative isolation. It is more arboreal than most of its neighboring chipmunks, and often nests in trees. Its name comes from its dark coloration and a preference for shady parts of the forest.

I learned a lot about this species from Craig Fiehler, a participant in the camera trapping workshop who studied the species' seed hoarding habits.

Fifty plus years ago, mammalogist Lloyd Tevis found shadow chipmunks of the Sierra Nevada to be fungus gourmets. Hypogeous (subterranean) fungi were their most common foods from spring to fall, and seeds and arthropods were of secondary importance.

in the Klamath National Forest Craig found shadow chipmunks to be serious feeders of ponderosa pine seeds on 6 experimental plots of thinned and unthinned forest. To study seed hoarding he had to individually number a very large number of seeds, and then treated them with Scandium 46, a gamma-emitting radionuclide with a half life of 84 days. Only then was he was ready to put 10 radiolabelled seeds each in 100 lidless petri dishes in the concentric circles around the trees.

With a low-light level time lapse video camera he filmed the comings and goings of the rodents, and learned that shadow chipmunks literally scarfed up the labeled pine seeds, stuffing their cheek pouches with as many as 100 seeds at a time, and then scampered off to bury them in scatter hoards.

Then he had to use a Geiger counter to find the seed caches.

The rodents revisit their cache sites and eat from 4-12% of the hoarded seeds per day.They also move them to new cache sites.This may seem like a waste of time, but it makes sense if you want to reduce pilferage by your neighbors.

Fooling your neighbors probably plays into other aspects of hoarding behavior. Chipmunks cache seeds at greater distances and in smaller numbers when their populations are high. They bury seeds farther away from trees on unthinned units, and usually in forest openings with a mineral soil substrate. Conditions there are more favorable to germination than in leaf mold and duff. They are seed predators and seed dispersers.

The shadow chipmunk may be a gourmet of fine fungi, but it also seems to be decent forester. 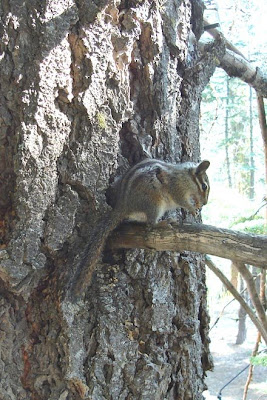 I propose the chipmunk may be an even more sophisticated forester. It likes fungi and buries seeds. Put the two together: The chipmunk possibly inoculates tree seedlings with fungi, starting a mycorhizal partnership that benefits both tree and fungus.

Not to mention that it has a very healthy diet. Thanks for the input.