Fooled by the rattlers 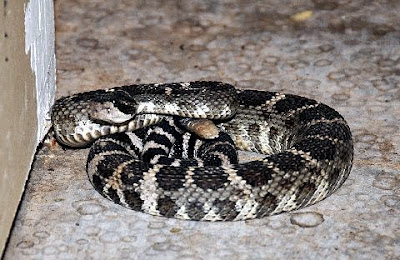 Here's what my camera trapping buddy Rich wrote last week after checking the trap line on the mountain in Napa County.

By way of background, we had set a cam in the "snake pit" on the last visit, and were anticipating some exciting images of rattlers swallowing mice and rats.

It didn't happen. Rich said the snake pit was lacking snakes, and the cam hadn't taken a single picture. It seems they have moved into the old stone lodge.

"On August 1st I walked into the lodge hallway and was headed for the fireplace room when a loud rattling stopped me dead in my tracks. After a face-off, the snake uncoiled and slithered into the cot storage room, and I went looking for something I could use to pin the rattler without harming it.

"In the storage rooms I spotted a 4 foot length of 3/8 inch wooden doweling and grabbed it up. On my way back to the snake I noticed the doweling had a loop of fine string at one end indicating someone had been noosing lizards with it. Whoever that was, thanks for the use of your tool. I found the rattler hiding behind the vacuum cleaner in a corner of the cot room, noosed it, took a couple photos, and then released it out by the old cesspool "snake pit." 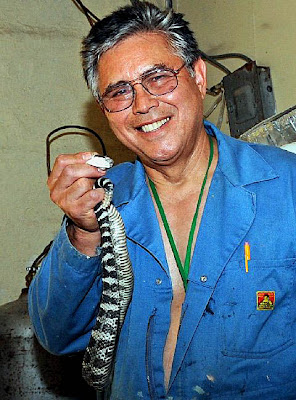 I responded, "Seems like the rattlers moved in the house, huh? Was your grandson with you? Who took the pic?"

"I took the pictures on a tripod."

Codger: "You must have felt like the lone trapper on the mountain. Must have been nice wrestling rattlers."

Rich: "Naw, I don't really relish wrestling rattlers like I did 40 years ago. But they sure are easy compared to things like mambas and cobras, aren't they? Wasn't it nice of the Creator to give them well-defined necks for us naturalists to grab hold of? I think that kind of empathy proves the Creator is a naturalist, and shouldn't it follow that naturalists therefore should be recognized as deities? Tell that to the Redhead.

(Hmmm. Codger's thoughts: Rich knows who's the boss in my house. No way she's going to read that comment. Nice try though. . . . .)

Rich: "Must admit that after getting into it, "wrestling" the rattler was fun, just like most everything else we do in our "work" is fun.
Posted by Camera Trap Codger at 5:54 PM