They're on the move 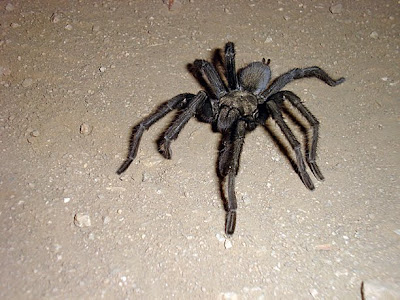 I knew I forgot something.
I failed to mention the tarantulas in my previous post about my last trip to the Chimineas Ranch.
They were on the move-- male tarantulas, marching inexorably to the promised land.
In this case the promised land can be translated to female tarantulas larger than themselves and the prospect of mating.
It's a fatal attraction, because female tarantulas, like many other spiders often eat their mates when the seminal transaction is over.
I saw dozens of the hairy fellows pausing at the edge of Soda Lake Road as I cruised by at 37.5 mph in my ancient red Honda. (I was low on gas).
Their traffic sense must pay off, because I saw only a few black splats on the road.
Arachnophiles celebrate the annual tarantula migration in various ways, and you can't blame them for getting excited.
You don't see sexual crusades very often.
And crusades that end with the mothers-to-be eating their sperm donors are pretty unusual.
Posted by Camera Trap Codger at 8:27 PM

OMG, I hate,hate,hate spiders! We live in the Rio Grande Valley and people say we have tarantulas there but I have yet to see one. I'll probably grab my camera, take a few shots then faint dead away!

Do you know of any primary literature on the tarantula migrations? Back in about May/June here in southern New Mexico, there were tarantulas everywhere. Someone told me that about every ten years there is a massive migration. Sounds dubious to me.

Seems like most folks either hate them or love them. But lets face it, tarantulas are just plain neat. A school teacher friend used to introduce the topic of spiders to the class by letting a pet tarantula climb up his arm saying, "Contrary to popular belief, tarantulas rarely bite...." then he'd let out a tremendous howl and clutch his arm. The kids loved it.

Zac, I don't have any primary literature on tarantulas, but will see what I can find out re your question.

I once saw a spider like that in the woods near Perth, Ontario. It was about 4 inches in diameter and walked in an odd, slow manner (sort of leg by leg). It must have been a pet that was released into the wild and we stumbled upon it. Unbelievable!! Anyway, I'm petrified of these beasts! :-) Marilyn