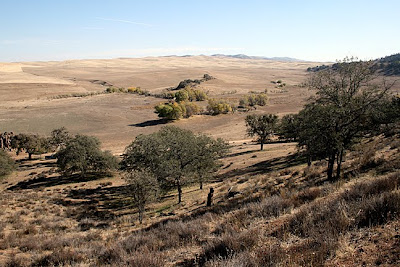 Camera Performance: Cameras were deployed for 1141 days (# cameras x number of days deployed). They were in operation for 723 days, or 42.3% of the days they were deployed. False triggers during 24 hr sets were usually responsible for the disparity. False triggers often filled memory cards to capacity and/or drained batteries in a few days.
68% of all photos from 21 comparable 24-hr sets (partial shade to open sky) were probably due mostly to heat-induced false triggers. The range was from 1.5 – 100%. False triggers probably due to rodents accounted for 58% of the photos from 6 night-time sets (range = 17.6 – 69.6%).

A total of 6965 photos were taken. 2977 of these (43%) contained vertebrates (including multiple species). This is equivalent to an overall 2.7 animal photos/24 hr.

Nocturnal versus diurnal activity: We tabulated the number of day and night visits for the 5 carnivores using data from 15 24 hr sets. The sample size is small but shows that with the exception of black bear most visits were nocturnal. 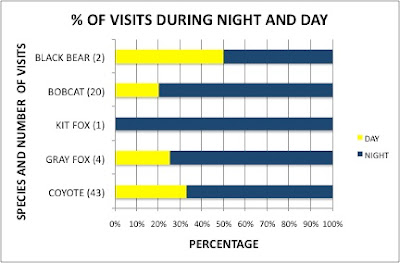 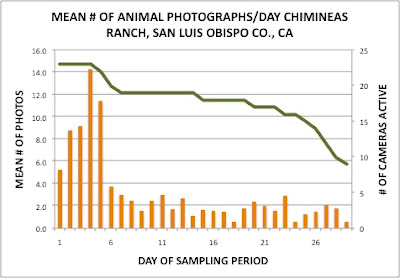 Since this could be due to the greater number of cameras in operation during the first week, we plotted the mean number of photographs for rodents, and the trend was still evident. 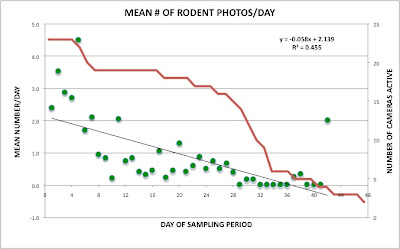 To determine if this was a response to bait we plotted the mean number of bat photos per day at sets used as night roosts. Bait is not an attraction to these insectivorous bats. The correlation coefficient of 0.073 was low, and the slope was reduced. 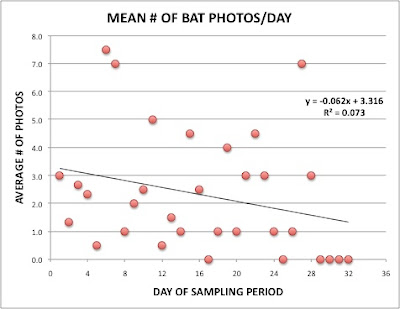 The disappearance of bait is the most likely explanation for the declining visitation rate of rodents and also perhaps for some mammals other than bats.

Neither coyote nor bobcat showed the distinctive decline in photo frequency shown by rodents.

The daily distribution of visits by coyotes however shows a different pattern. At 10 camera sets low visitation prevailed most of the time, and highest visitation peaked between weeks 2 and 3. This is what Larrucea and her co-workers found: coyotes don't rush in to visit new cameras. 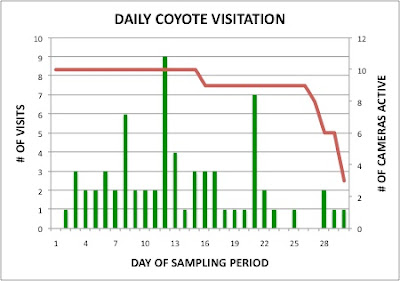 Bobcats showed two peaks of visitation during the first 2 weeks, but the pattern is not well defined. 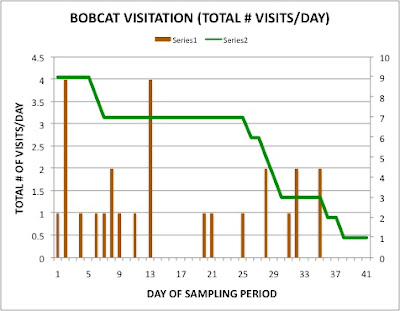 Visitation data will increase in the coming months, and differences among species should become clearer.

More graphs are coming, and after that you get to see photos from the cameras Craig just checked (including a new carnivore!).

Nice results, always nice to see a cameratraps view on a mammal community.

Do you think it was worth it putting the bait out? It got you a burst of activity in the first few days, but seems like that was mostly rodents, which you'd probably detect anyway. Did you get animals coming to bait that you didn't get later with no bait?

Daytime false triggers are mostly due to heat waves coming off the ground. At night the rodents cause them. In some places you get the rodent activity in the absence of bait.

In a future post I'll show rates of visitation in the absence of bait. I believe baits make a difference, but by attracting certain species they may delay visits by other species. An ideal attractant (not necessarily a bait) would be most useful in short-term surveys, and certain lures might be good to attract specific species. But I don;t believe there is a species specific animal scent lure. Even puma urine attracts a number of unrelated species (I posted on this a couple years ago).

We need to do experiments to answer your question about attractants. BTW, a student working in NM has data showing that controls get significantly fewer pictures and species than attractants.