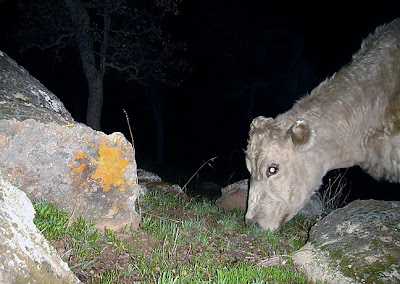 Not the most commonly photographed mammal,
but one we could always identify.
This wraps up the analysis of the preliminary data collected by Craig Fiehler and me at Chimineas Ranch.


You'll be relieved to know that the next post will be usual fodder.

Number of species by habitat: The number of vertebrate species recorded in each habitat differed, with Blue Oak Woodland, Mixed Chaparral, and Annual Grassland having the largest numbers of species. 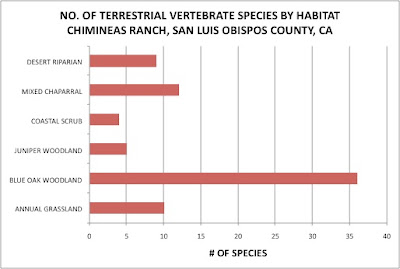 The number of mammal species also differed among habitats, and the order of abundance was similar to vertebrates in general except in Mixed Chaparral and Annual Grassland where the number of species was the same. 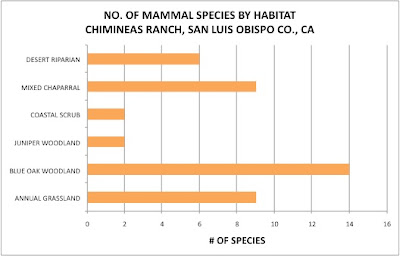 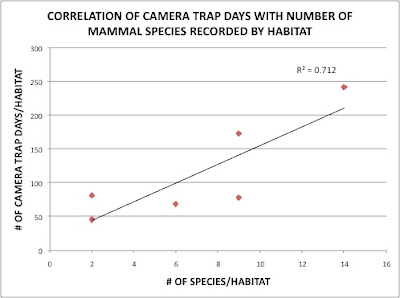 Species accumulation over time: A pronounced stepwise distribution emerged when we plotted the cumulative number of species during successive weeks of the survey.  The addition of 6 to 21 new species took place during weeks 1, 15, and 36, which coincided with camera deployment in new locations. Single species additions during successive weeks took place at the beginning and end of the 6-month survey.  The stepwise pattern is unusual and probably a response to the appearance of bait at new locations.   Gradual growth of the curve during recent weeks indicates that more additions can be expected, whereas a plateau indicates stasis. 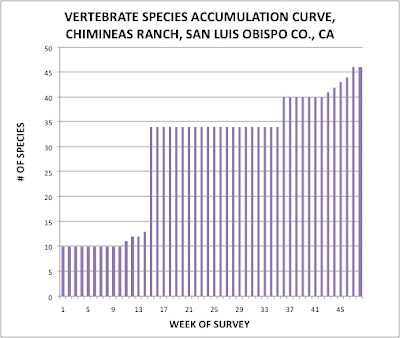 Similar patterns of stepwise and gradual increases can be seen in separate curves for mammals and birds. 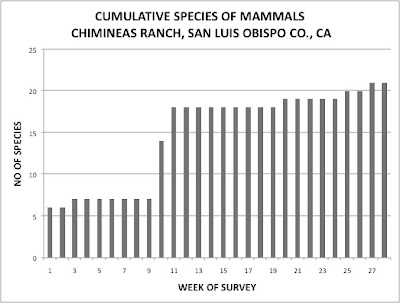 The stepwise accumulation of bird species took place at Poison Water Spring during only 8 days before the memory stick was filled. Large numbers of birds watered there in the morning and late afternoon. 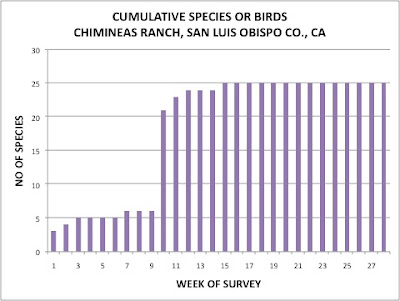 Discussion and Conclusions
Camera performance: Camera performance was adequate, but false triggers and/or battery depletion and occasional camera failure significantly shortened the effective sampling periods.  This is unavoidable because of the vagaries of PIR sensor technology. Active infra-red or laser sensors would be preferable for 24-hr sampling, though the external electrical wiring needed for these systems has inherent shortcomings, not least of which is its attraction to rodents which chew the wires.  24-hr camera sets in open-sky situations quickly filled the memory with false images, but high percentages of false triggers also took place in partially shaded areas.
In such situations we revised our practice and set cameras for night-time sensor detection. Rodent activity was the primary factor contributing to false triggers at night, and this is clearly an unavoidable response to bait.


It is desirable to reduce false triggers by judicious use of the night-time setting in partial shade and open sky situations. Where direct sunlight was absent, or limited for brief periods early in the day such as rock recesses, grottos, or large overhangs, PIR sensors worked very well, and captured excellent daytime portraits of coyote and a napping gray fox, and night time images of bats in flight.


Photo frequency trends: The use of baits undoubtedly increased the probability of detecting many species of mammals, with rodents showing a marked numerical effect during the first week. Photo frequency peaked on the night 4 but by night 8 had subsided to an oscillating baseline level. Carnivores on the other hand were attracted to the canned mackerel throughout the sampling period, and coyotes approached it even after two months by which time the odor of canned fish had become an overpowering stench.


Survey effort: To date survey effort has been uneven across the seven habitats. Differences in habitat selection among carnivores are well documented. We need to increase survey coverage in under-represented habitats such as coastal scrub, desert riparian and juniper woodland in all seasons.


Four species of carnivores (coyote, gray fox, bobcat and black bear) were detected in the first eleven weeks of the survey, and the kit fox appeared on week 20. However, two normally abundant species were not detected.


The absence of striped skunks is unexpected because they are habitat generalists and respond readily to a wide variety of baits. Local extermination due to epidemic disease such as rabies seems unlikely, because contagion would likely have reduced populations of other carnivores (Carey and McLean 1983).


The absence of raccoons is also unexpected but may be explained by the small number of sets that were made in the vicinity of water.


The undetected status of ringtail and spotted skunk may be due to their patchy distribution in the region. Spotted skunks in Texas were found in older mesquite habitats (Neiswenter and Dowler 2007), and throughout their range they tend to occur in canopied or brushy habitats. These researchers found spotted skunks to be “more specialized in their coarse-grained utilization of habitat during foraging than striped skunks”, but they did cross open expanses less than 100 m to reach other patches of mesquite.


If present on Chimineas, spotted skunks may be found in more densely vegetated habitats such as coastal scrub, closed juniper woodland and mixed chaparral.


With few exceptions, mustelids are characteristically less often encountered than many other carnivores. Low densities and largely exclusive home ranges of badgers and weasels may explain their lack of detection. We expect continued sampling in grassland habitats, especially with active colonies of ground squirrels to reveal these species.


Finally, we made special efforts to detect ringtails by placing cameras in steep rocky areas and bluffs, but to no avail. The species is widespread in California and where it is most abundant in the Sacramento Valley it is often found in rimrock and bluffs bordering creeks and rivers (Orloff 1988). Though Orloff cites but two records of ringtails in San Luis Obispo County, they will likely be found in canyon riparian situations.


We will continue the survey through 2010 and intensify our efforts in underrepresented habitats.

Acknowledgements
Many thanks to Bob Stafford, Senior Cal Fish & Game Wildlife Biologist and Director of Chimineas Ranch for permission, enthusiasm and assistance in pursuing this study.

Hey Chris,
I have to say I am a fan of these graphs and the data. It helps a lot in deciding on how long to place a camera trap and where to focus efforts.
Thanks!
Sebastian

That is very good to hear, Sebastian. I have data of varying duration from 7 different sites now, and one of these days I will post on it. It never hurts to look at your data, even if you think you have the big picture.

I agree, plus there oare often details you can find that don't jump out at you until you compare the information (I am probably biased though since I studies bio in college and we are obviously all intrigued by data)

Excellent data clearly presented with some interesting results.
Thanks for your efforts!

I hope you will keep updating your content constantly as you have one dedicated reader here.

hello there thanks for your grat post, as usual ((o: