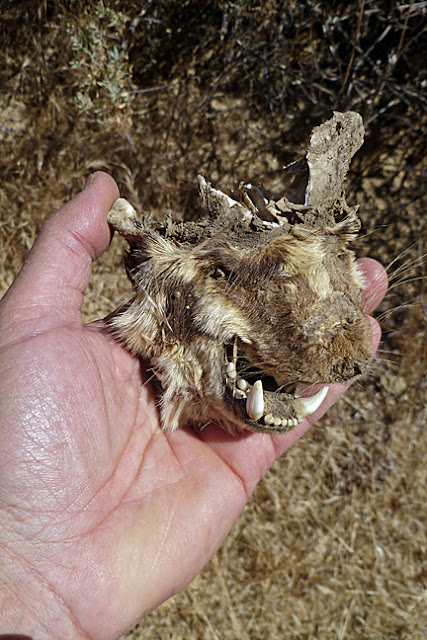 In a few days we'll look at the comings and goings in Badger Head Gulch, but first some background.

To begin with, there is no Badger Head Gulch.

We named it for poor Yorick, above, who met his untimely demise here last spring.

The gulch is actually the headwaters of Saltos Canyon, which at this point is just a steep-walled erosion gully of compacted sand, sandstone and shale rubble.

Most of the year it's a dry dusty gash in the Caliente Range with a narrow game trail tracing it length through occasional thickets of saltbush, mulefat, and alkali goldenbush.

In the winter it drains a brown slurry of outwash into the much larger Saltos Canyon.

There are many places like it on the ranch, and we explored it on August 10th for camera trapping.

The banks were riddled with burrows of all sizes ---  a good sign -- and as we ascended the gulch we noticed that the steepening walls were closing in on us.

Not a place to find yourself in a flash flood. 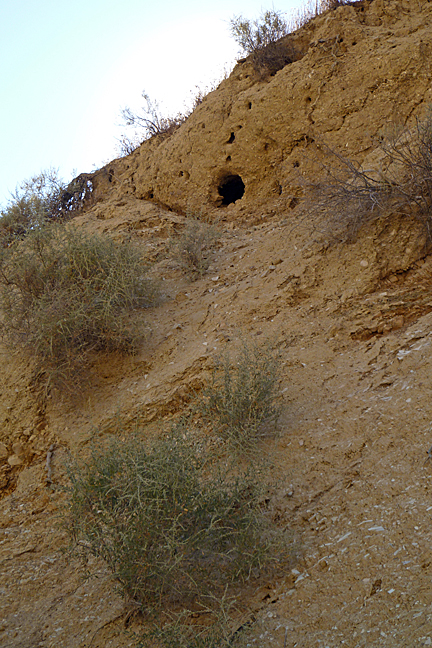 Right off we encountered mementos mori --

and the severed and sun-cured head of Yorick -- the brain case and its nutritious contents munched away.

As the walls of the gulch boxed us in I realized this was the perfect place for predatory ambuscade.

A puma could leap down from the rim in one or two bounds and a coyote could surprise prey on a bend in the trail.

And while a fleeing jackrabbit might be able to scale the walls of that gulch, it would be a risky move for a black-tailed deer fleeing a puma.

The soil was too loose . . . better to run like hell down the arroyo, if the cat didn't get you first.

It was late afternoon when our hot and weary team arrived at a fork in the gulch -- a natural funnel and a good place for the camera. 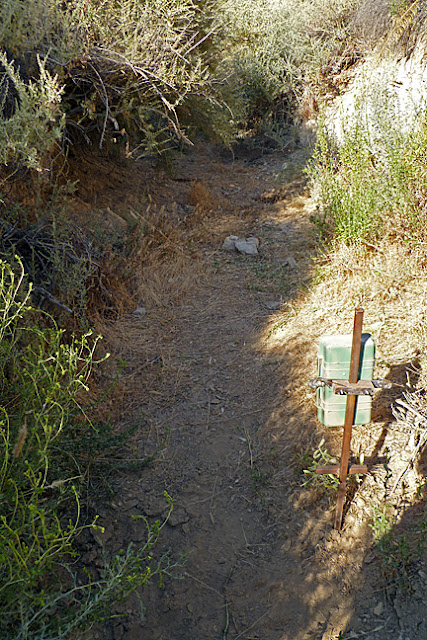 Posted by Camera Trap Codger at 10:45 AM

You find the best spots!!

Can't wait to see what you get!