Invasion of the pigs

The heat wave of August decided us to concentrate camera trapping around Chimineas's waterholes.

Until then we were unaware of the pig invasion.

Feral pigs are known on the ranch, but as pigs go they seemed well-mannered and their imprint on the landscape could only be described as a soft touch.

In 15 months of camera trapping we saw only one hog in hasty retreat, and we never recorded a pig on one of the cameras. 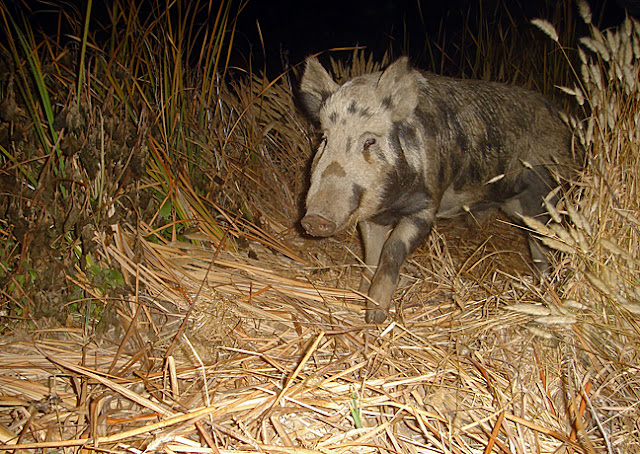 Until August they had left little sign around the waterholes, but the cameras captured their insouciant expressions as they imitated rototillers through the night.

In no time they converted to quagmires the grassy floodplains of three ponds.

Old Tattered Ear even demonstrated how he fertilizes his freshly worked areas. 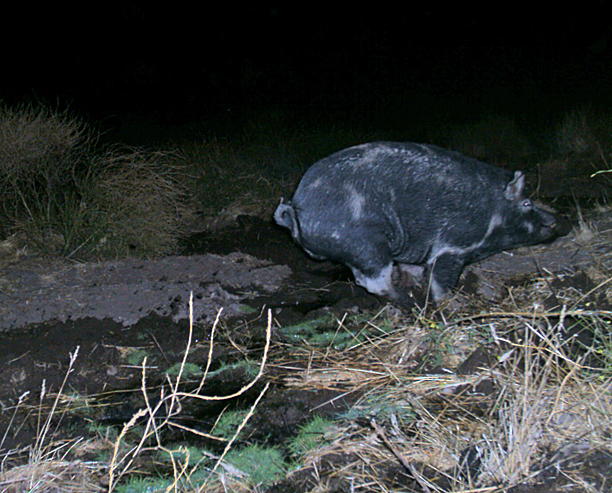 In the wake of the invasion came the pig hunters.

Our photos show them shortly before 5:00AM stoically pussy-footing through the mud-works.

But they moved on and waited for porky elsewhere.

And wherever that was, porky didn't show.

California Fish & Game wants to limit the number of pigs on the ranch, because an outbreak of pigs can have devastating effects.

Pigs are just too good at competing with native species like bears, elk and deer, and they can wipe out pockets of rare species, like metamorphosing spadefoot toads.

A new hunt will soon be scheduled and the hunters will be informed of the pigs' latest haunts -- based of course on camera trapping records.
Posted by Camera Trap Codger at 9:44 AM

Would love to see the spadefoot toads next spring. Get those pigs!

The pig hunters slog thru the pig wallows next to wetlands and then keep moving and do NOT hunt next to the wallows?

(I ask because I am trying to come to grips with the feral pig situation in FL, which is bad, real bad).

They didn't get any pigs on the first hunt, and apparently didn't hunt at the waterholes the pigs were using.