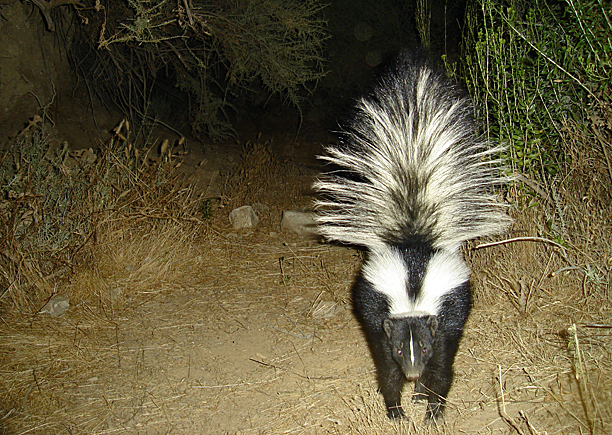 The Man-skunk of Badger Head Gulch is a fit welterweight, well-groomed, and in the prime of life.

His equipment is in good working order, he carries his banner high, and he deports himself with confidence. 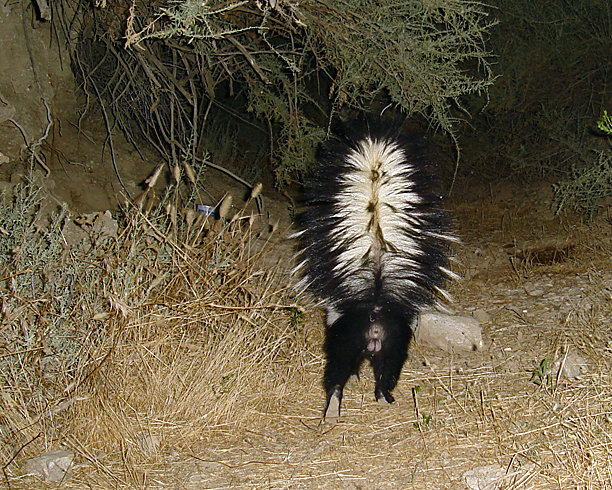 With 15 appearances totaling 44 images over a 40-day period Studly was seen anytime between 7 PM and 3:30 AM, and was the most photographed carnivore at set 392.

When Studly discovered the bait on the 3rd night several woodrats, cottontails, and deer mice had already passed or examined it.


Studly tackled it with determination.

In 41 seconds he defeated the rocks and carried the can to the saltbush.

He was only a skunk, but we hadn't seen a skunk in 15 months of camera trapping.
August and September were good to us -- we got Stinkarella and Studly-- the skunk slam.

There are only two carnivores to go -- ringtail and long-tailed weasel.
Posted by Camera Trap Codger at 9:45 AM

How would one go about trying to get a weasle? I also am looking for some variety in my pictures, a certain baiting technique or lure that might draw them in? Thoughts?

Find a place where there are lots of mice -- meadow vole runways are a good place to look. They also forage along dry creek beds and rock piles. Good luck, they are hard to get.

I got to this old post by googling "skunk testes"