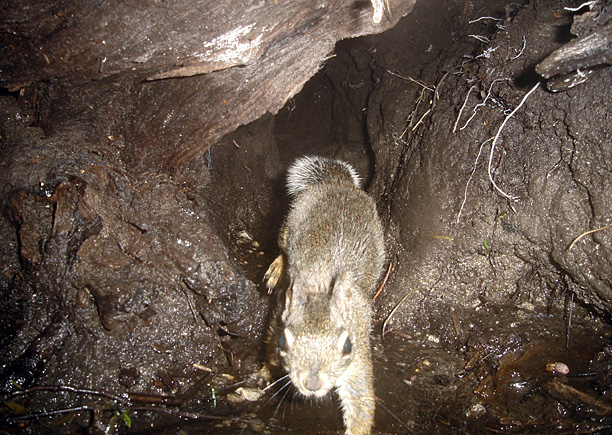 An adventuresome chickaree was one of two new sightings in the showtl's subway.

It was photographed exploring the tunnel twice, in the morning and afternoon.

JK of Cameratrapping Campus had a similar chickaree (or Douglas squirrel) experience at another showtl burrow a few miles from here.

What's going on? Are they hunting for truffles down there?

Chickarees are well known as fungus connoisseurs, but I know of no reports of their activities as subterranean fungus-foragers. 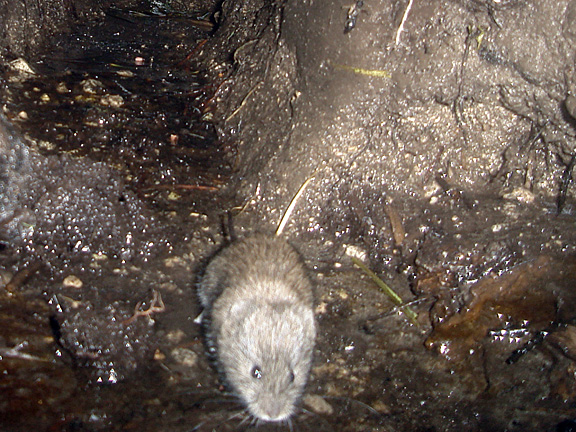 Most curious however was another appearance of the water shrew.

Is its peculiar posture just a coincidence or is it pushing mud in the middle of the tunnel? 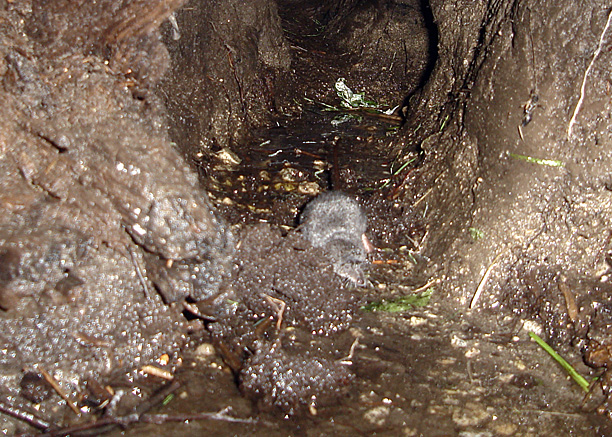 The mud appeared on August 27 shortly after midnight, and the shrew was photographed 21 hours later, and once again 2 days after that.

After that the mud pile slowly disappeared.

I'd love to know what it was up to.

I am sure the showtls' tunnels hold many more secrets of natural history.
Posted by Camera Trap Codger at 8:09 AM

What a HEAVENLY peek into SUCH a mysterious world!!

1. I JUST learned of the existence of chickarees. How did I miss them? AND got to see them that same day at Yosemite (Mariposa Grove), and now you post this. I'm sure little is known about their pursuit of fungi underground 'cause, you know, it's hard to see down there unless one is SKILLED as YOU are. Yay!

2. Shrews are SO FASCINATING! SO mysterious. And SO TERRIBLY DELICATE. Joy of camera trapping v. pitfall trapping is that you don't have to find dead shrews and be sad. Love your kinda work for that and many other reasons (document behavior vs. a trapped and freaked out individual).

3. While I do love herps, fuzzy mammals are JUST CUTE. I can't help it. Delightful, as ever. Thanks!

Glad you enjoy this stuff, BB. You wouldn't believe the thrill of opening the camera and seeing the photos the first time.

These posts of the showtl's tunnel are great. Fascinating stuff!

Maybe the squirrel comes down to cool off, or a drink?

My first thought with regard to the shrew was scent marking. I've camera trapped some of our mush shrews sentmarking, but then again I don't know whether or not your shrew is that way inclined or not. Maybe it is defecating/urinating instead? It might also be fighting with it's dinner?

Great stuff and you have to let us know if you find out more about what these critters are doing down there :)

Thanks, Henry. I think burrow cams anywhere will probably yield some surprises.

I too have been really enjoying these underground explorations! Very cool! I want to know what that shrew was up to as well!