Will the real Ermine please stand up


We are just back from the north fork of the Yuba River.

Yesterday, the Codger, the Redhead, Audrey, and Fred pulled the last three camera traps, and I am terribly amped.

The picture above is one of the reasons.

You may recall that the codger was uncertain that "Herman the Ermine" was correctly identified in a recent "underworld post".

A few commentors thought the suspect was an American mink.

The unmistakable ermine pictured above confirms that the previous mustelid was indeed Slinky the Minkie.

This ermine was photographed in the same Aplodontia (=showtl) tunnel where the mink made its appearance last month.

To get an idea of the relative sizes of this little predator and its prey, compare the two pictures, which I have cropped more or less to the same size. 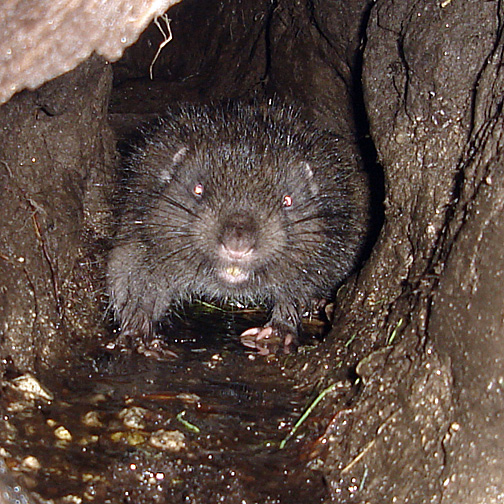 Like the mink, the ermine evidently failed to find the showtl, which showed up 6 days later.

Its absence makes you wonder if predator detection changed the rodent's use of the tunnel system.

Anyway, we're not done yet.

We staked out several Aplodontia burrows for camera trapping next year.

Our winter work is cut out for us. We've got to get faster cameras so we can diminish the number of false exposures down there in the showtl's underworld.

There's a lot of traffic and probably a few visitors that are just too fast for our cameras.

And to give you a bigger view of the showtl's busy underworld, here's an uncropped photo. 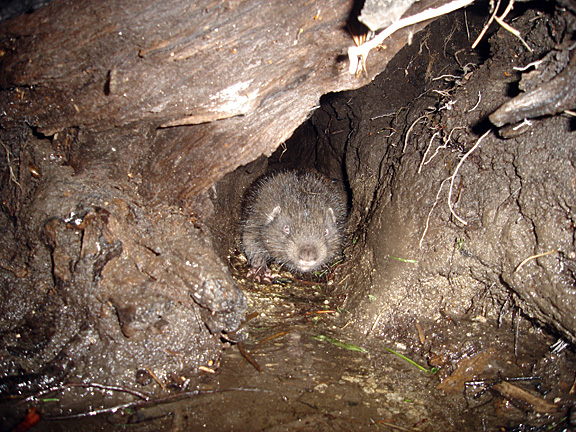 Posted by Camera Trap Codger at 9:04 AM

Excellent! I was thinking a bit about this and am wondering if the mink and stoat forays into the boomer's maze aren't more focused on finding the other inhabitants, such as Zapus and Dicamptodon?

Incredible to see the diversity within a single burrow. Thanks.

You have taken us to places we would never see without your assistance. Thank you and you deserve to be amped.

Yes, the allure of the underworld is a danger to the adventuresome, including the over-amped camera trapper who is known to take chances when the creeks are in spate. Without a doubt there's a cornucopia of choice meats down there. The boomer would certainly make a thanksgiving feast for those of the slinky tribe, but who's going to pass up a chickaree or a long-tailed vole -- oh, oh, I'm giving away the future posts!

Great shots. I guess it is time to get my Chickaree burrow post up in my failed attempt at the Mt. Beaver.

Post it Jake, or I'll scoop you! But I've another surprise in waiting, though I am not sure what it is.

Imagine what that flash must be like for those critters.

Actually, they're getting 3 quick little flashes before the big one -- red-eye mode. That way they don't get blind-sighted. At this close range the flash is actually pretty dim compared to being in the big outdoors.

I'm also going to use infra-red flash in the future to see what difference it makes.

SUCH exciting shots, awesome. And amazing diversity--SO nice to hear things are still working, ecologically speaking, that is. And WOW, that size comparison was VERY edifying.

@randomtruth: I don't think you are going to find Dicamptodon in the Sierras, but you might find them co-habitating with Aplodontia in Pt.Reyes. I would actually be surprised if you didn't, right? Codger you know anything about this? I presume Pt.Reyes has long-tailed weasels.

Yah, Jake, I was talking generally about rufa burrows, not specifically to the Sierra's rufa californica. Wikipedia shows that at least 23 different species have been documented in aplodontia burrows, including Dicampts.

@RT: I figured you were peaking generally, but I did have to look it up to make sure the range map in my head was not way off. Great link, thanks for sharing it.

Once you use those infrared flashes they will only hear the sound. Are you converting a cam to infrared?

You do see really a lot of different animals!
Interesting Blog!