No, the likes of Jud don't always make it to old age In Montana territory, and a reliable source tells me that Jud is no longer among the quick.

I am not talking about that sour-puss Jud Fry.

I'm talking about a squirrel, a one-eyed chickaree and an assassin of munklets, the seed-gobbling chipmunks that adorn the stump outside the kitchen window.

You see, the stump is an ecological theater, and when Montana women knead bread and bake pies they like to tune in to the daily stump show.

Those women rise at dawn to stoke the fire, and then they stoke the stump with sunflower seeds.

And they know there's a social order on those stumps.

At the top are the Steller jays. Then come the chickarees, the munklets, and finally timid dickey birds like juncos and mountain chickadees.

But when things go awry on the stump Montana women take note. 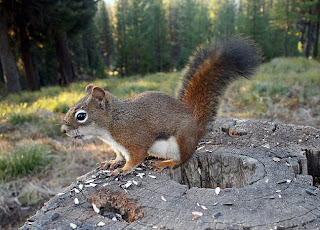 It's hard to believe, but two of our most adorable squirrels, chickarees and flying squirrels have a dark side.

They have a patent appetite for red meat, and are on record for occasionally eating nestling birds and smaller rodents.

I have a suspicion that our California chickarees (Tamiasciurus douglasii) may even lay waste to red tree vole nests just so they can eat the dwellers within.

It's unusual however for a chickaree to become a serial killer, but that's what happened to Jud, and he excelled at it.

He stalked, chased, and maimed munklets, and the chipmunk population started to dwindle.

I asked Carl for photographic evidence, and he sent me the pcture of one of Jud's victims. What drives a chickaree to such madness? No one saw the assassin eating its victims.

Or was it madness?

The sociobiological explanation -- well, let's say hypothesis -- is that chickarees that regulate the population of their competitors have an advantage, especially when competitors become numerous.

Well, rodents have no qualms about pilfering each other's seed caches, and both chipmunks and chickarees depend on seed stores to make it through the winter.

Chipmunks however have the advantage of hibernation.

Chickarees on the other hand don't hibernate. They must eat everyday and tough out the long hard winter by feeding on their cone larders.

If chickarees could talk, they just might tell you that offing chipmunks is one way of leveling the playing field.

Of course that doesn't make murder any easier to watch.
Posted by Camera Trap Codger at 9:18 AM

Interesting post. I have some confusion in my mind about common names of squirrels. I have heard the name, Chickaree applied to Red Squirrels. Are Chickarees and Red Squirrels the same thing?

My mother always wondered what happened to the birds that would brain themselves on her picture window. After all, there wasn't a heap of dead birds down there, so she figured they must recover.

Then one day she was working outside and heard a "thwack" and saw the bird fall. Instantly, a squirrel ran out of the bushes, grabbed the bird, and made off with it. All my illusions about squirrels were torn away in one moment...

For the record, Mom tried a variety of things to keep the birds from hitting the window, but nothing seemed to work.

Studying competitive interactions between these (and other) rodents would be a very fun area of research.