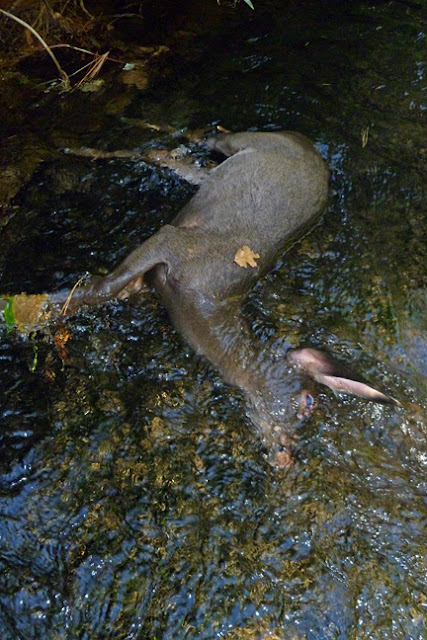 I was absent-mindedly amusing myself, tossing Fred's stick into Hendrick's flume, when I found myself looking at a carcass in the water, a fawn in winter coat.

When I pulled my camera from the bag, I inadvertently flipped my pruning saw into the water, and soon realized that Fred wasn't about to heed my desperate commands to fetch it.

As I watched my saw drift into a riffle I jumped in and rescued it myself.

That's when Fred finally noticed the drowned deer and looked at me as if to say, "What now?"

The carcass was without injuries, but it couldn't have drowned here; it must have happened a few miles upstream where the flume's vertical sides channel much swifter and deeper water.

I heaved it up on the far bank, dragged it into a patch of thimbleberry canes, but decided against setting a camera nearby.  Too many people with dogs.

The carcass was untouched on the following two days, but I assumed it would be gone when I returned from a four-day trip to Mono County with Random Truth and Jake.

Not so. It was still there yesterday afternoon, day seven.

Though unscathed, it had ripened enough to call in a vulture, but the bird hadn't started its work.

Today the carcass was gone, but no scraps and whitewash told of sated vultures.

He sniffed about cautiously, then stopped in his tracks, raised his hackles, and growled and barked with agitation.

There was no drag trail, and it's my guess that a bear packed it off.

It took seven days for the vulture, and eight days for a bear to find it.
Posted by Camera Trap Codger at 9:50 PM

I am sure a cougar can do the same, but I have a camera trap photo of bear walking off with a juvenile deer in its jaws. (Cats usually make drag marks.)

Glad you got your pruning saw back.
A video of you jumping into the flume and then rescuing the dead deer would have been great on Utube.
It will be interesting to find out how long it took Vultures to find the Racoon on the Mad River. I figured about 5-7 days.

Chris, my disappearing carcass story......a couple of weeks ago there was a dead doe in the PG&E creek/ditch on my property. It obviously had been there for some time and was pretty ripe. It was bloated and the sides of the creek are pretty steep so I did the logical thing; I called PG&E and told them they had a dead deer in "their" creek. One employee was out in a couple of hours and decided that this was a two man job. When I went out the next morning, the deer was gone. Not as poetic as your version but then I live a simpler life.

ps. Not clear why she died. There were marks on the side of the creek where it looked like she had tried to crawl out. Maybe a broken leg or ?????

Sooo, no camera trap on the carcass. Did you see "Eating Giants" on Animal Plant?

Missed it, Doug. I have to go to my daughter's house to watch most of the channels. Crumby reception here, and I'm too cheap to pay for cable or dish.