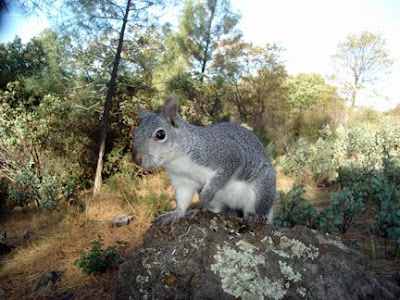 [A raised forefoot while immobile and staring often indicates uncertainty. This full-frame photo shows an alert young squirrel fixating the camera with hesitation. In the next frame it resumed eating sunflower seeds.]

Many animals are cautious or fearful of unfamiliar objects or situations. This healthy response to the unknown is called neophobia or “fear of the new”.
I believe that neophobia was the reason my first camera trap pictures of gray fox were in the distance or half out of the frame. After a few weeks the animal(s) approached more closely, and finally became bold enough to examine the camera at close range. 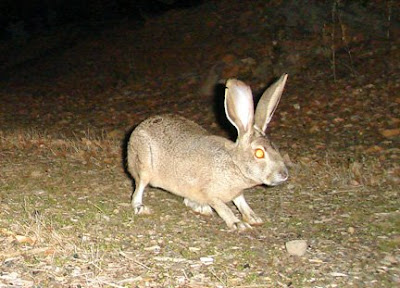 [A jackrabbit assumes a startled stance in reaction to the camera trap. The widely spaced rear feet indicates it is prepared to bolt.]
If there is bait near the camera you might read ambivalence in a neophobic animal’s body language.
The attraction to the food is strong, but so is the hesitation to approach the strange object near by. The animal may stare at the camera, or stretch its body and creep forward as though it wants to approach and back off at the same time.
Or it may approach and sniff toward the camera, then circle and test the air from a different direction. These are manifestations of approach-avoidance conflict.
Caution wanes quickly when repeated exposure to a strange object proves harmless. Since there are neither positive nor negative consequences, the animal habituates to the stimulus.
Habituation is why we don’t often see neophobic or avoidance–conflict reactions in camera trap photos.
Also, habituation usually defeats the clever tinkerer who cooks up various repellents for garbage-can bears and bird-feeder squirrels. Fearful reactions wane, unless the repellent is painful or extremely disturbing . The animals habituate. 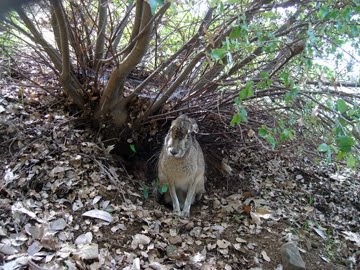 [A jackrabbit in a normal resting stance in its form (nest).  The animal habituated to the camera which was staked closer to the nest on three successive nights while the animal was absent. The camera recorded its daily cycle of rest, grooming, and defecation for a week without apparent disturbance.]
Posted by Camera Trap Codger at 4:05 PM

I am amazed at the pictures you capture with the camera trap.... Thanks for sharing

I tried the old blow up plastic owl in the garden trick to keep the crows out of the corn. Worked for about 1 day and the crows learned fast, so now I use wire cages.

I guess this "neophobia" would hold true also when you set up a ground blind in the woods for photography. I've read that it's best to set it up and leave it there for about a week before using it so the area wildlife will become accustomed to it. Cool information. Please write more about this kinda stuff camera trap master!

thanks for the explanation. so many nature blogs depend on pretty pictures alone.

Yep, unless your drop a steak on the trail, they're usually going to steer clear of it for a while.

This is really great data Codger. Very helpful for folks using camera traps for studies. I too have found that if I'm schizophrenic with the camera placement I get inconsistent results as the animals acclimate to it. But once I leave it someplace for at least several days, it quickly gets ignored and regular behavior resumes.

interesting stuff. Ive seen that pose when photographing the grey squirrels here in the UK. At my local park theya re hand tame, so I hold my camera on the ground like someone else would with a nut and the squirrel often comes bounding over and then stops about a metre away when there is this strange black box there in my hands instead of a nut. Some run off but others move slowly forward to get a closer look and smell. I have a photo of one as it is sniffing the lens!