Another time, another place 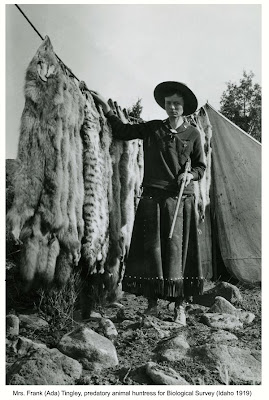 [Photo credit: Biological Survey Unit, USGS Patuxent Wildlife Research Center]
I wrote to Al Gardner of the USGS when I was fishing for wolf trapping photos last week for the most recent post on animal psychology for camera trappers.

He sent scans of these archival USGS photos of a government trapper’s camp.
On the back of the photo is the following information:

"Mrs. Frank (Ada) Tingly, predatory animal huntress, for Biological Survey (1919)--now Fish and Wildlife Service--which directs the work of a large number of hunters engaged in destroying predatory wild animals in the west, such as wolves, coyotes, and mountain lions. Several huntresses have been engaged in this work and have been as successful in it as the men employed for this purpose. (Idaho)" 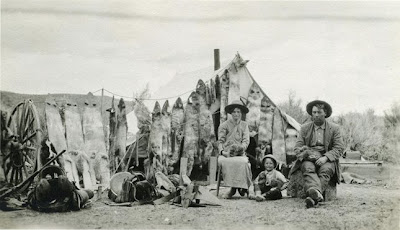 [Photo credit: Biological Survey Unit, USGS Patuxent Wildlife Research Center]
Women like Ada of course traveled with their husbands.
The US Biological Survey photographer who took these photos was Luther Goldman.
Luther was taken with Ada Tingly, noting that not only was she attractive, but she was also a hunter and trapper who did all of the "women's work" as well.
That included looking after the Tingly's son, seen here with his father fondling wolf pups.
Women with these virtues are still hard to find.
Posted by Camera Trap Codger at 5:32 AM

What is the spotted/striped pelt likely to be in that area? Bobcat?

That thar's a bobcat, TH.

You're right these type of women are hard to find. A real pioneer woman - hardworking and a lady.

I so wanted a life in the wilderness...but couldn't find a guy who was interested in it, too.

I finally bought and moved into a cabin on 40 acres, off grid, at the edge of a national forest. Alone.

I got up with the sun, went to bed with the moon; learned to plow, chop wood and even haul water for a couple months when the well went dry at the height of the drought.

I had raptors and turkeys, bears and bobcats, lions and even a lynx for neighbors.

I hiked, fished, learned to snowshoe (NEVER go out without your poles!), wandered around watching flora and fauna...and plowed myself out when it snowed.

It was heaven, but I had to sell it, eventually. So now I hear from guys "Wow, you're awesome...I couldn't have done it". Bah!

Heck, I'd like to do it AGAIN! We can't be so rare as all that...or perhaps such men are every bit as rare.

Beverly, you sound like one of those pioneer ladies that Larry McMurtry has written about. Good to know you aren't extinct. (I know there are a few still out there in the mountains and prairies.)