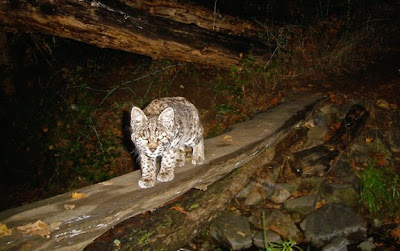 When we set the cams in Marin County it was raining and I was wet. I would have preferred a more natural crossing over the creek, but the animals didn't mind.

Five species crossed the creek here, but not all of them walked the plank.

The first animal to do so was an immature-looking bobcat. It might have crouched when the red-eye flashes starting to blink. That was at 5:47 AM.

Thirteen days later a larger bobcat crossed shortly after midnight, and shut its eyes when the camera flashed. 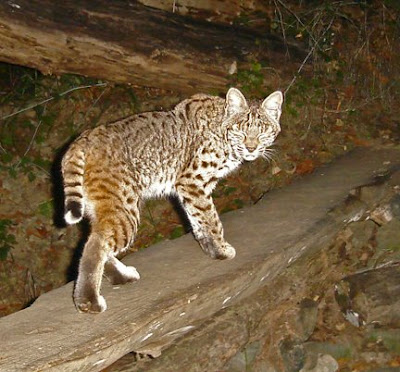 I believe this was the same animal sitting on the plank at 3AM three days later. It was probably waiting for something edible to come trundling down the creek bed, which was dry. 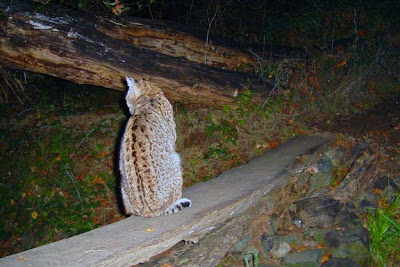 We got 6 pictures of bobcats on the bridge or the trail leading to it.
Posted by Camera Trap Codger at 12:21 PM

I wonder if the bobcat in the last picture is waiting for the flash to startle mice or voles?

That would be a smart cat, but I think it wants to startle them itself.

looks like he was posing for the camera... LOL

Yeah it would be a smart cat. Depending on the extent of the array of these cameras it might be very acclimatized to them. That is what I was pondering, but did not state. If it was the same cat repeatedly in photos, it is an interesting thought that it purposely placed its back to the flash to avoid the flash or may be use it. Many animals find uses for human contraptions and human help. Gulls hawk insects around building night lights, crows use cars to open nuts, killdeer hunt temporary puddles under street lights, orcas in Antarctica at one point would lead whalers to oil whale (the orcas got the yummy bits), birds learn to use the automatic door openers to get in out of Lowes all over etc. They are very smart, looking for an edge against hunger. It would be interesting and a shoe on the other foot if an animal learned some use of these cameras (well other than bear play things).

I had the opportunity to watch a bobcat for an hour and a half while deer hunting from a tree stand this fall. Much of the time it was within 30 yards of me. It did a lot of what the cat sitting on the plank was doing, and what we've all seen house cats do. It would sit and just close it's eyes for a few minutes. Then it would lick itself a bit, scratch itself behind the ear, and resume sitting. Just kind of hanging out. Then after what seemed like forever, it crouched down low, belly to the ground, and started a slow stalk though a massive thicket of briars. In all the time I watched it, even moving through a thick dry leaf bed 6 yards from the tree I was in, the cat did not make any sound at all.

I think the cat on the plank was just kicking back and taking in the view, killing time before it got down to killing something to eat. Great shots, bobcats are beautiful animals.

I'm with you, Pam. My favorite people-user is the toad on the back porch catching moths and other crash- landing beetles under the light. We named ours Hoppifer.

Neat observation Mike. The classic cat predation strategy. Sit around and wait for something to show up.

I think you have three different cats. The one sitting does not appear to be the same one walking away from the camera.

We used to have Red Fox in our area but haven't heard of any around for years now.

Sitting cat does look heavier. Wish I had good head and forebody shots of all of them. The shoulders and forelegs are good places to find differences.

When I went to Colombia in one of my travels around South America I was walking through the jungle's path it was so exciting because I could see the named "Chupacabras" it was terrible I was so sacred.