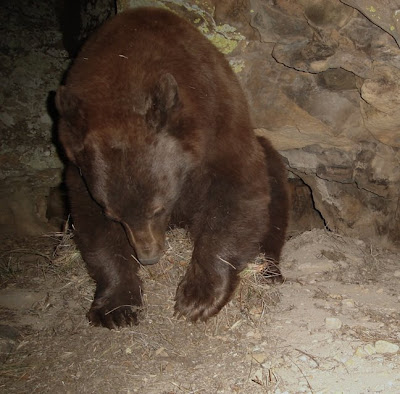 [red momma pulling grass toward den entrance]
Brian sent me a CD of all 213 photos taken of Red Momma and the two cubs (black and pale cinnamon), and I just compiled the data.

The three bears were active at the den for three days (Nov 4 – 6), and then retired inside (Nov 7), where I presume they are napping now.

November 4th and 6th were workdays.

On the 4th they first appeared at 2:54 in the afternoon. They went in and out of the den several times until 3:06. Then the black cub and mother pulled bundles of grass into the den for 6 minutes, and disappeared.

They were back 5 hours later. Black cub went into the den, and mother resumed dragging grass to the den. After getting it down the hole she rested in the entrance for an hour.

Shortly after midnight, the pale cub -- who had contributed nothing to building the nest -- left the den. 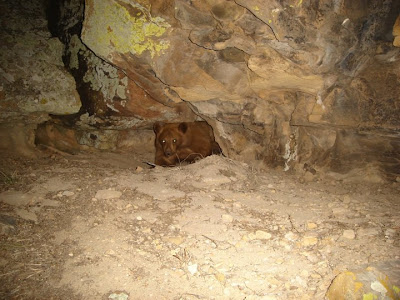 [the slacker, after its nap]

Mom periodically lounged in the entrance looking out into the starlit night until 5:00AM. 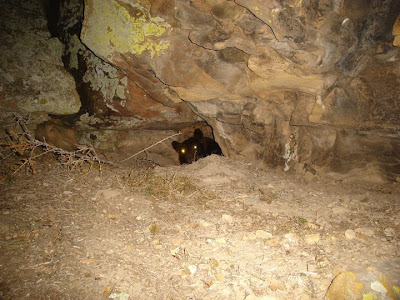 She wasn’t photographed again until 11 o’clock the next night. There was no action during the day.

The next night was the same – mom lounged on and off in the entrance, and all three were absent most of the day.

They started nest building again on the 6th around 3:15PM, and work ended just before 6 o’clock. 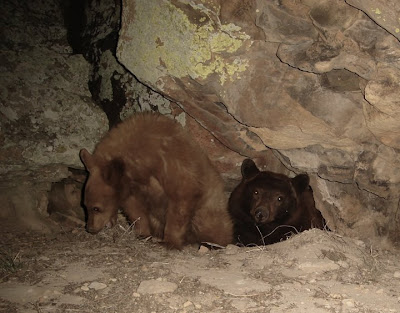 The camera recorded an ear or a paw moving in the den entrance 12 times during the next 24 hours. 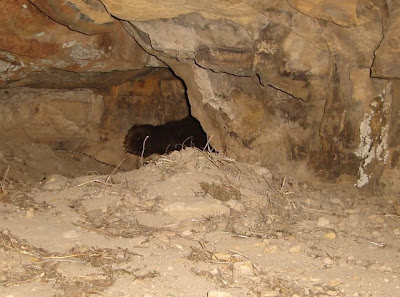 Then Brian pulled the memory stick, and replaced it with a new one. We're not expecting much activity at the site for a few months.

In summary, the bears started nest building shortly after they arrived at the den, worked late in the afternoon, and were not seen in daylight before that. At night the mother seems to have alternated between dozing and star-gazed in the den entrance.

The pale cub seems to be a slacker. Not a single frame showed it pulling grass.

Any opinions as to what sex it might be?
Posted by Camera Trap Codger at 8:26 PM

I think all field biologist should have classes on camera trapping in the future. A great tool for behavioral studies. The slacker is a male in my opinion.

I guess my guess agrees with Owlman.

I have loved these denning bear posts. They could almost convince me to take up camera trapping. :)

Yeah, the slacker reminds me of my adolescent self. What a contrast to the black female yearling. She was a real worker.

The denning is quite interesting, but I realize now that video recordings would have been much better. I am going to start experimenting with PIR activated lighting with our local wood rats.

WOW.. those are great.

Funny, I thought the pale slacker reminded me of myself.

That's cuz your mama does all the work, Jayla. Just like the bears.

Fantastic information and together with the photos makes a good study.

What's the possibility of getting a fiber optic camera and sliding it into the cave for a sleeping photo? I've had my knee scoped several times and the photos are very clear. Maybe adapting a game camera to a long plastic pipe and ease it into the hole, I would think the heat from the bear would set off the camera, or maybe when it jabs the bear in the side LOL.

I wouldn't think the bears are very far into the cave, but would like to see the position the three lay during the long sleep and how much they toss and turn.

We think alike, Cliff. It would be fun to crawl down there when they are gone, and set up a cam just to see who visits such a den. But it would be more exciting to do exactly what you are thinking. I see that they now have small remote security cameras for sale. One could mount one on a remote control toy jeep, and give the bears a thrill. One second thought, they might give us a bigger thrill. Or maybe we'd find our expensive little toy rendered useless in 15 seconds.

On a related note, I received my SSS boards and am putting them into 1060 cases with s600s. Nice compact little controllers they are, too. Thanks for recommending them.