A clear day, another set 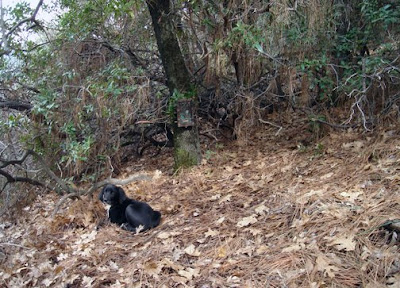 [Fred next to camera set #219]
It's raining again, but I am not complaining. We had a few warm clear days, and yesterday I set another camera trap about 2.5 miles from the house.

When it comes to setting up cameras, Fred's an absolute nuisance.

He barks at me, removes things from the rucksack, pulls at the cable when I'm attaching the camera, mounts me when I am adjusting the camera's view, and runs off with the GPS when it is averaging locations.

It's the kind of frustration you curse about and then chuckle.

While this particular site offers little in the way of scenery, it is situated at the edge of a narrow ridge where animal trails converge from both sides.
Ponderosa pine, oaks and mazanita -- good edge habitat. 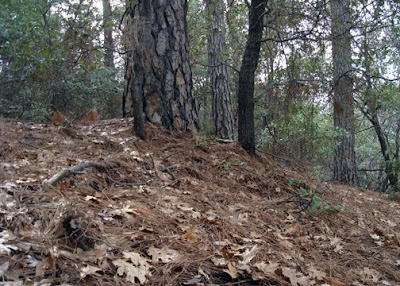 On the way back I stumbled upon this old scat.

Whatever left it--puma or coyote--it was eating deer. Fred stepped on it and didn't even notice. But he can find and tries to eat every turkey turd in the woods.
When that happens you wouldn't believe a cursing old man could move so fast. 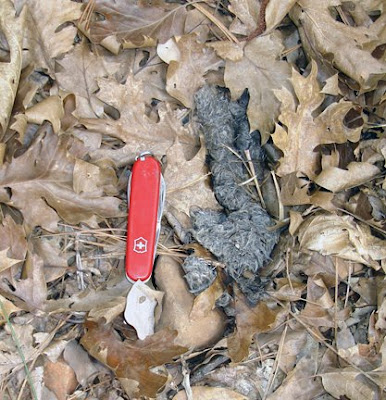 Posted by Camera Trap Codger at 9:16 AM

Funny -- my dogs ignore turkey droppings. But anything feline ...

Fred is doing a great job of being a puppy and learning the proper Camera trapping
ettiquite. Way to go Fred!

I guess its a matter of personal taste. . . gag!
But I do enjoy having the little joker with me.

Hey, it might be better to eat it than to roll in it! My big dog tracks around the yard every morning looking for fresh 'coon scat. Ewwwwwwwwwwwwwwwww

I just love this new sidekick of yours!

Didn't you get Fred so he could ~help~ you with camera trapping? Sounds like you need to train him to heel while you are adjusting the cameras.

Right, Jayla -- we're working it. He just can't contain himself most of the time. And he gets bored. Canine Attention Deficit Disorder.