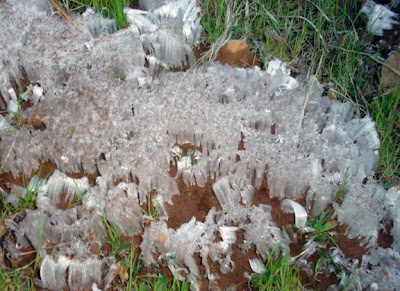 The temperature dropped below freezing yesterday morning, and there were those columnar ice crystals again.
I surfed the web last year to learn more about them, but failed to find anything.
Technically, this kind of ice may not be frost since it is formed from water in the surface soil.
The reddish brown tint of the ice is due to soil particles that were lifted on top of the columns as they formed.
Does anyone know what this kind of ice formation is called?
(Does anyone, besides me, care?)
Posted by Camera Trap Codger at 1:56 PM

They would seem to be analagous to "frost flowers," which typically extrude from sodden, somewhat rotted branches and stems. They are common on fallen branches here in the bog on cold winter mornings after rainy spells.

Look like they are heavier ice crystals than my photos of Frost Flowers, but made the same way.

Sounds like great weather your having, don't plant the garden yet.

Thanks a lot, guys. Appreciate the responses.

I have seen these on the side of trails in the Smokies. Glad to now know what they are called.

Oh, wow! I've seen this on my land, usually coming out of freshly turned dirt on top of mole hills, and I've tried to explain it to people and ask if anyone's ever seen it, but nobody ever knows what I'm talking about. Cool! I'm gaing to hit Wikipedia right now!