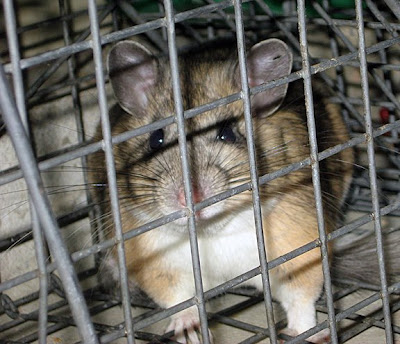 [Pretty damn cute for a rat, wouldn't you say?]

As I am sure you all know, I have a fondness for our native wood rats.

And for the last year have been on a dogged if desultory quest to camera trap the Prince of Wood Rats -- Neotoma cinerea -- the bushy-tailed one.
To date I have failed, which is more than a little embarrassing.
As a reasonably fit though aging mammalogist I should be able to nail this species with my cams -- and with little effort.
Well, Saturday night I got a call from the daughter of a childhood friend.

She lives in Utah at 6000', near a reservoir, and something was making a nest in her garage.

The animal control officer told her the intruder was probably a muskrat. 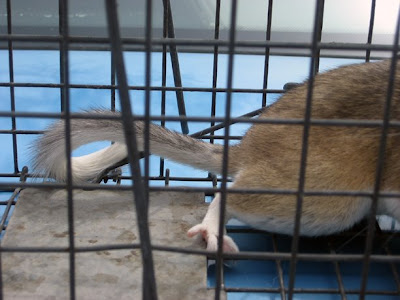 [Okay, it's not bushy by squirrel standards, but it's a lovely tail for a rat.]
Ahem!
I begged to differ, predicted the identity of the intruder, and advised her on baits.
They caught the little bugger and here's the story and photos, which I am grateful for permission to use and quote.
"Dear Dad, Mom, and Dr. Wemmer,
Thank you so much for your advice. Our Bushy Tailed Wood Rat ( if that is indeed what he is) was trapped a few minutes before midnight last night using your suggestion, Dr Wemmer, of oatmeal and peanut butter.  Unfortunately, we didn't have any sunflower seeds, but the rat didn't seem to mind.  What a cute creature. He looks very much like a humongous hamster with a fluffy tail.  I didn't think to hold a ruler up to the cage, but the body length was a good 6 inches or so, and the tail about the same length. I have attached the photographs we took that turned out.  Unfortunately we have none without the cage, since this animal was just amazingly fast.  Much faster than my camera.

The kids named it Bob in honor of one of Sandra Boyton's songs. Turns out they were right about him being a male.  He certainly has boy parts.

Since we also weren't up to traipsing around a strange wood in the dark in order to release him, Bob camped out in the cage in the garage overnight.  He was a well cared for rat, with the cat's water bottle from their traveling kennel hooked to the cage and the lid full of peanut butter and oatmeal.  Wayne even wrapped the cage in old towels since the kids were concerned Bob would get too cold in the garage overnight. They didn't want to find a body in the morning instead of a healthy rodent.  However, Bob survived his night of captivity just fine. And while he didn't like us picking up the cage to transport him, he was quite content with his oatmeal peanut butter.

Once we had the ok from the Sheriff's office today, Wayne took Bob down to the nature preserve suggested by our local animal control officer and released him. Apparently bushy tailed wood rats are considered a protected species in this area, so we had absolutely no trouble getting the approval to release him back into the wild.  He took off like a rocket once he realized the cage was open. The preserve is almost 9 miles away, so we are hoping that we took Bob far enough for him to be unable to find his way back to our garage.  Thankfully, he didn't do any damage to anything in the garage, and while it wasn't fun to clean up after him it was a pretty easy task.  We just have our fingers crossed that the wildlife stays down at the reservoir from now on, where we can watch them in their own habitat.

Thank you again Mom and Dad for suggesting Dr. Wemmer as a source of information.  And thank you so very much, Dr Wemmer, for helping us catch our visitor in as humane a fashion as possible.  We greatly appreciate your advice and willingness to coach us.  Thank you again.
-Erika 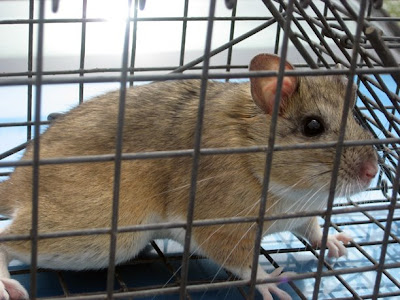 Posted by Camera Trap Codger at 5:40 AM

Good on you Codger! I too love our woodrat friends and spend a lot of time convincing our family that they aren't "icky ratus rats." The cuteness is definitely helping.

Our local woodrats don't seem to have bushy tails though, so I think they're macrotis.

That rat is adorable! We have all sorts of wood rat nests in my area, and I have never hung out in their area at night so I have yet to see one. I imagine they look pretty much like your friend's rat. Cute little things.

If you ever go driving along hwy 178 in the Onyx area, just to the west of Walker Pass (like maybe 8-10 miles before the pass), there are hundreds! of wood rat nests tucked amidst the willow trees along the north side of the road.

What a wonderful story! Good to see it had a happy ending (with cute photos as a bonus too).

Beautiful critter. So glad they were able to humanely trap it instead of having the poor bloke end up in a regular rat trap. Those are fine for Norway rats, but not a wonderful guy like this!

That is one beautiful little creature.

We left a bucket of paint water to settle-out overnight in our garage once and found what looked like a bushy-tailed rat in it the next day. It is not cute to think of such a large rodent living in our garage. And I recently found large skat that appears rat-sized in that same garage...time for traps.

Each August through October we get an invasion of woodrats in our garden harvesting and setting up shop in our shed. For the last two years we have trapped only two or three before they "ran out." So far this year we have trapped and released ten (they are going a longs ways off so I am sure they aren't returning overnight). We know there is at least one more since there was harvesting evidence again last night and the trap was already full. We will be gone for two weeks so I am sure the shed will be a mess again when I return. For solitary territorial animals, they sure are social this year. - Margy

We heard noises above the hung ceiling in the basement and thought we had a mouse problem. I put up a standard mouse trap with peanut butter on it. The next day the trap was gone. At that point I knew we were dealing with something bigger. We found its nest and cleaned it out. In a few minutes it showed up to see what had happened. I got a good look, and it was a wood rat. We purchased a live trap and loaded it with peanut butter and oats. I think it felt it had been hurt by peanut better once and would not enter the trap. We changed to a carrot and some lettuce and that got him in just a few hours. Just for reference, we purchased a Havahart model 1030 from Home Depot.

One further note. We had a family and the young ones are 2/3 full grown. They can go through the mesh on the trap mentioned in the previous post. I had to cover the sides and bottom with 1/4 inch mesh to keep the small ones in the trap.

wow this is great i found one behind restaraunt in tahoe i work at. i was hoping to find what this was. he was found in a water heater room snackin on chips! we let him out in the meadow where he swam across a river to a nice willow bush. very cute and very docile. great to see one

I think we just had one in our house. We came back from a ski trip and our christmas decorations were tipped over ON THE MANTEL and we were given sunflower seeds for a gift and they were on the floor. Apparently they like shiny things so our house was perfect. We got him out with a broom. He liked to climb the curtain in our bedroom and stare at us while we are sleeping! He is okay and we didn't harm him. Thankfully. He was cute.

Hi all...
I do believe we have one of these lil guys living on our porch. I am in Maine and we have been hearing lots of noise on the porch lately and never thought much of it cause we have mice here to, then we started noticing it was a little loud for a tiny mouse, we saw it the other night out on the porch stealing from a trash bag! We usually let our cat hang out on the porch as she is an indoor cat, we don't dare let her on the porch now! Its about 6 inches long and very fat! Gonna try and catch it over the weekend, we dunno what to do with it tho. :(

My little woodrat has caused us a lot of trouble. The urine and scat smell has created an intolerable atmosphere in our permantaly parked fifth wheel vacaton "home". No wires have been permanently damaged but insulation has been wrecked.

After about 10 hours of patching holes, I am guardedly optimistic that I have stopped is ability to get back in. I have vacuumed huge volumes of his scat and sprayed a couple cans of Lysol on the affected surfaces but to little affect. I have purchased some stronger enzyme type disenfectant for the next try. I probably need to saw an access hole into the ceiling in order to completely rid the area of scat.

I know it is a wood rat because he lost his tail on a glue trap. I have a little regret over the pain and possible death sentence but it is overshadowed by hundreds of dollars worth of damage and repair. I would be willing to cohabitate if not for the one sided compassion.