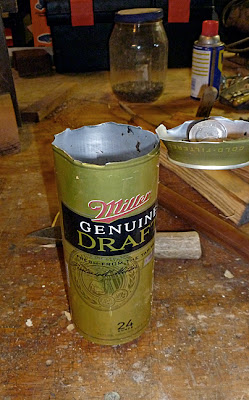 It's no secret that I pick up trail trash, and beer and power drink cans are the items most commonly discarded on my regular beat -- the flume trail.
It seems an increasing number of flume walkers quench their thirst with pricey beverages instead of  water.
Yesterday I found a 16-ounce can of MGD tucked into the duff next to the trail.
It was half full and as I drained the foul-smelling liquor -- no, not into my mouth -- something soggy blocked the opening.
A mass of black fur, a tiny foot and a shrew-like tail.
I carefully stuffed my stinky can with its treasure into the outside pocket of my rucksack and continued my late afternoon hike.
Back at my workbench I opened the can and found the marinating contents to be three shrews, a carabid beetle, and a millipede. 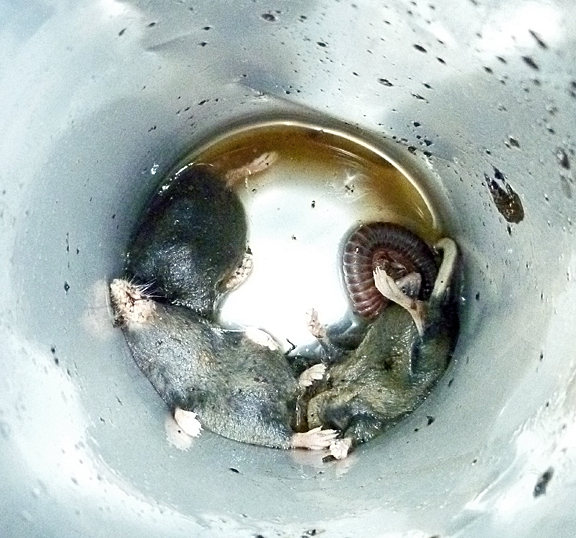 The strolling beer-drinker had set the perfect shrew trap, a smooth-sided pitfall that attracts arthropods.
The shrews stunk, but they were still intact.
So I doused them with alcohol, inspected their teeth with my dissecting scope, and keyed them out as Trowbridge shrews (Sorex trowbridgii).
This western species eats Douglas fir seeds, in addition to usual earthworms and insects, and few live long enough to grow the brown summer coat of their second year. 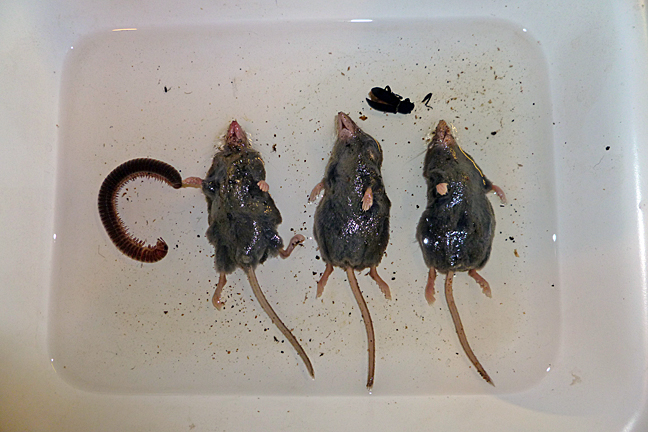 Pleased with my finding, I retired to the house.

As I passed through the kitchen I smelled the rotten shrews.

"That's not what you're smelling", said the redhead -- "We're having sauerkraut with pork chops tonight".
Posted by Camera Trap Codger at 8:50 PM

They look a bit like the three tenors in full voice (minus the freaky large millipede). Discarded beer containers have played a role in the near extinction of the Bermuda rock lizard (Plestiodon longirostris). They're a strangley olfactorily directed skink, perhaps uniquely so, perhaps a result of evolving on an island once ripe with nesting seabirds. Throw a beer bottle onto shore, and surely if the rock lizards are there, in they go. Trapped, they die, they rot, and the yummy stench is broadcasted, and on it goes until there's no more room among the bones and maggot exuvia. I once counted 11 parietal bones from a single Amstel bottle. Party on.

So those shrews must be really tiny to be able to slip into the beer can--are they mouse size?

Wonderful story. Poor shrews. And thank you so much for the guidance on the camera. I 'll see what turns up in my stocking on Christmas day.

Thanks all, and thanks Hugh, very interesting. JoEllen, they're little guys between 2-3 inches in head and body length.

In a spring basin at a popular swimming hole in Florida, I noticed a vinegar bottle in the water containing the remains of a half-dozen or so troglobitic crayfish. Possibly, the combination of naturally low dissolved oxygen levels in the aquifer, large amount of oxygen demanding organic sediments in the bottle and the narrow opening of the bottle combined to asphyxiate these blind, albino crustaceans. When one would enter and die in the bottle, a subsequent crayfish would enter to consume the previous one, and then die in turn.

Neat but sad stuff can happen in Florida. Thanks mann.

Oh, what a double tragedy: Littering and pointless wildlife death!

(and they wasted their money/beer...what the heck!?!)

Awesome. Now i know how to set a trap for my mammalogy class while consuming lots of beer