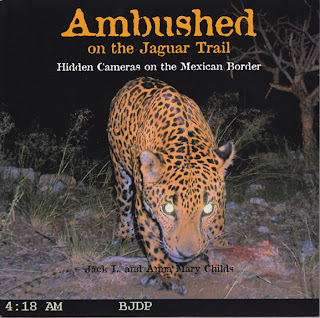 Cougar Magic recommended "Ambushed on the Jaguar Trail" to me last summer, and my daughter gave me a copy for Christmas.

It is subtitled "Hidden cameras on the Mexican Border", so of course I read it in two nights.

The authors, Jack and Anna Mary Childs are a retired land surveyor and school teacher whose pastime of tracking mountain lions with mules and lion dogs led to the chance discovery of a jaguar on a hot August day in 1996.

At the time jags in the American southwest were thought to be a memory of the past, but this and another sighting kick-started a joint venture by Arizona and New Mexico Fish and Game authorities to investigate the status of the big cat.

The Childs got involved and became committed camera trappers.

This book is a good read about using camera traps to learn about jaguars, and contains lots of good natural history about southwestern wildlife.

It also captures the fascination and thrills of camera trapping, and is a testimony to what we can learn from a harmless but mentally and physically invigorating hobby.

My hat is off to the Childs for their commitment to nature and their contribution to wildlife education and conservation.

There aren't many books about camera trapping, so you won't go broke collecting them.

Add this one to your collection.
Posted by Camera Trap Codger at 10:24 AM

My lady got this for me for Xmas too. I've got a huge stack of to-read books, but I think this one will sneak its way to the top.

This may be of interest too.

Thanks for the tip Codger. Looks like it will be an interesting book.

We're all waiting for your book on camera trapping to be published.

Thanks! It looks really interesting. I'm getting it!