A warm spell recently summoned overwintering flies from the woodwork, and for several days the redhead wielded the fly swatter with deadly vengeance.

The autumnal house fly is often found to be the face fly (Musca autumnalis), that nemesis of cattle whose exquisitely designed mouthparts sponge up secretions of eyes, noses, mouths, and wounds, and then stimulate further secretion with rasping prestomal teeth.

The face fly evolved with the herding ungulates of Eurasia, but not until 1952 did it make its appearance in North America.

Somehow they missed the boat several hundred years ago when the Spaniards brought livestock to the New World.

But they found everything they needed, multiplied, went west, and reached the golden state in the 1960s.

Face flies have an intimate relationship with eyeworms.

Eurasian and African face flies of several species are hosts of at least a dozen species of these parasitic nematodes of the genus Thelazia.

Adult eyeworms live under the eyelids and in the tear ducts of ungulates.

They lay their eggs in the lachrymal secretions, and the flies lap them up as they feed.

After hatching the worms develop in the flies' fat bodies, and when about half grown they transfer back to eyeballs, where they cause anything from mild inflammation to conjunctavitus, and even blindness.

Though the newly arrived face flies were not carrying eyeworms, there happens to be one species of eyeworm native to North America.

Guess where it lives?

There are even a few cases of human infection.

Entomologists had long believed that the canyon fly (Fannia benjamini) was the California eyeworm's host, but it really didn't matter because our state eyeworm was economically inconsequential.

That quickly changed when word got out that the face fly was headed west, where wet noses, rolling eyeballs, and drooling lips abound.

If the face fly and our native eyeworm were compatible California's livestock could be in trouble.

Cattlemen started to worry and the state's economic entomologists began looking into the likelhood of an eyeworm epidemic.

The entomologists examined seventy species of arthropods associated with native mammals, but only a small fraction of canyon flies harbored eyeworm.

Then it was discovered that canyon flies were actually three separate species, only one of which -- an uncommon and apparently undescribed species was the true host of the eyeworm.

There was a flurry of fly collecting to start a laboratory colony.

"Some dexterity with a net is needed to catch any of these flies . . . , but the vector species seems to be particularly elusive, judging from its behavior in the laboratory."

So noted the investigators, but they prevailed and the elusive new species of fly was bred in the laboratory where it consistently infected domestic rabbits. 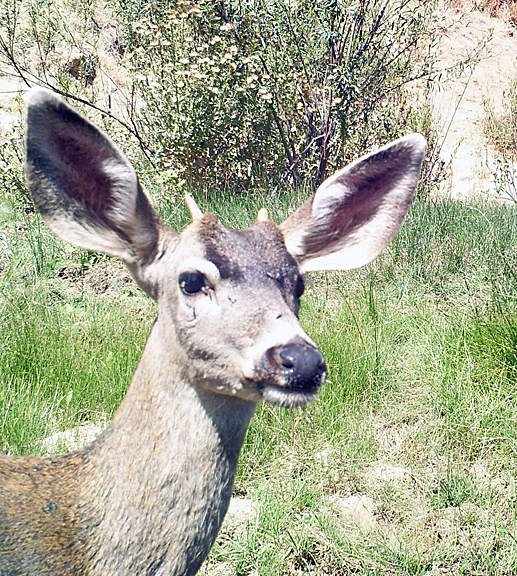 With a ready supply of eyeworms and their eggs, the entomologists fed the parasites to face flies with deft and caring tenderness.

Our native eyeworm is highly host specific. In other words, face flies and domestic livestock are not suitable hosts of the California eyeworm.

Neither are people, most of the time.

But take note dear friends.  Eyeworms will scare away a date faster than any amount of spinach in your smile.

The take home message is this: "Don't joke about flies or make fun of entomologists."

Note: In the absence of voucher specimens I am not sure of the identity of these flies, and for now I will assume they are the common face fly (Musca autumnalis), which winters in homes and buildings.

Eyeworms....ugh. Ive never been able to muster any enthusiasm about parasites. Despite my propensity for grossness I can't even pretend to be excited by them. Very informative post though.

Steve, I shared that view until giardia and Dengue fever got me, but managed to avoid malaria, esp after seeing a couple of macho friends who braved Asia and Africa while flexing their bare pecs to the inigenes of the opposite sex. My interest was further stimulated when an old friend/Nepal hand got a nose leech from drinking in a hill stream. Its good to know what can get you.

Yow! When I was deciding what shots to get for Belize/Guatemala my doctor mentioned Dengue fever and said: "You don't want Dengue fever. It's not a good thing." He's the king of understatement. So, got that shot, too. And you survived! Nose leech? YUCK!

I was warned about Dengue and they said if I got it twice I could "go hemorrhagic". I tested positive for all 5 serotypes, meaning I had Dengue several times. I do remember being down and out several times in the field -- way back when, but didn't know what it was at the time.

Excellent post Codger.
I had a case of Giardia that I got drinking crystal clear water while rafting the Middle Fork of the Salmon river in Idaho. I lost 15 lbs in less than a week.
I wouldn't wish that on anyone!
You got off easy because it could have been worse.

I got giardia in Nepal -- it was practically asymptomatic. I lost weight, but no stomach problems, excessive flatulence or anything like that. The only effect was that I couldn't finish a bottle of beer. By the time I was half finished I had lost my appetite for it. Very sad. Since the cure took effect I haven't left a bottle half full.