Among the fungus eaters 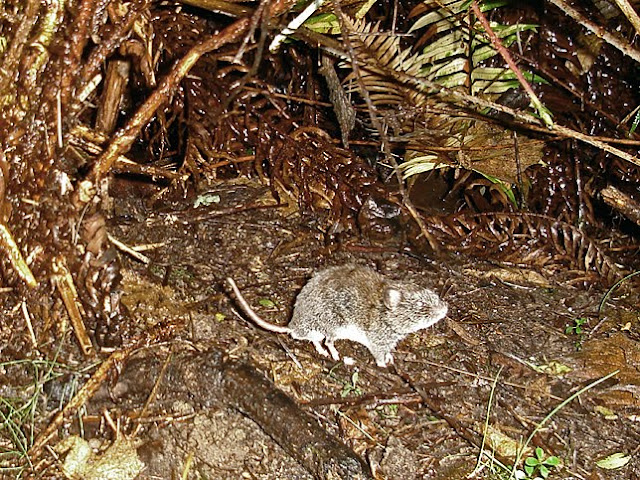 Finding the Fog shrew (previous post) had a seductive effect. I decided to set three cameras in the damp fern-choked slash on that same north slope.

I was still after mountain beaver, but I wanted to see what else was scooting around in there.

I was looking for the charismatic little guys.

"Botherations" visit the camera trapper in a thicket.

You need a scaled-down perspective, and to get a Lilliputian's view you have to crawl around in the undergrowth.

It was a different world in there, but various camera trap sets soon presented themselves, and I decided to skip the use of bait or lure.

The holidays came and went, and last week during a spell of clear weather Terry and I made a dash for the cameras.

All but one contained water and several were too wet to work. (A few days over the wood burning stove fixed all but one.)

I was pleased to get mountain beaver, shadow chipmunk, and another shrew, as well as the usual deer mice and a winter wren. 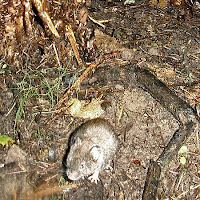 But the prize was this vole.  It wasn't the usual meadow vole, that I knew.

But could it be the mysterious white-footed vole (Arborimus albipes), the arboreal browser of alder leaves? Or was it the California red-backed vole (Myodes californicus)?

It never hurts to have friends who are taxonomists, so I sent the photos to Al Gardner at the National Museum of Natural History.

He identified it as the California red-backed vole, Myodes californicus. 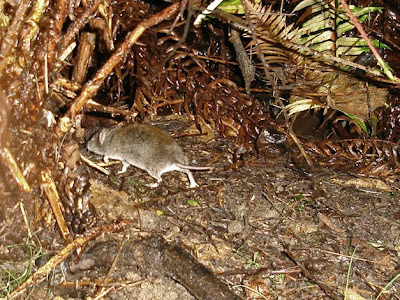 ". . . some Russians are trying to resurrect Clethrionomys, but I don't think they will be successful. The few Arborimus albipes I looked at all have longer tails and lacked the "reddish" back. I did  not see any Arborimus albipes in the general collection from Arcata, which is the type locality. It would be nice to get specimens (with tissue). If you get up to Arcata tale a look at the mammal collection. Incidentally, some M. californicus do have white feet."

This is not a species you attract with bait. 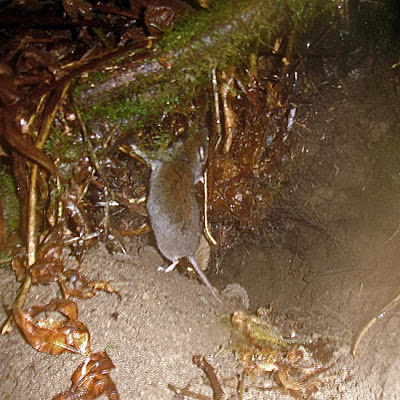 This is where I found the vole. 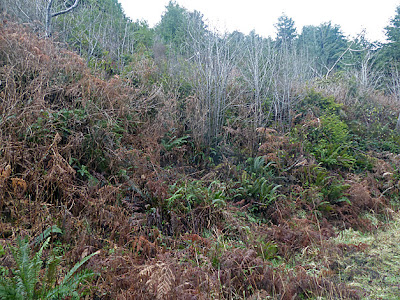 There are redwood groves near by, but it is not coniferous forest. It's early second growth -- braken and sword fern, salal, Ceanothus and alder. And a colony of mountain beaver.

Is the California red-backed vole another free loader seeking truffles in the mountain beaver's underworld?

You read my mind, Bill -- and I already have some candidate burrows in mind. If there was only a teeny weeny IR video cam . . .

Very cool. When I was in Alaska this summer, I set a cam on "guard mode" just to see what would happen. At first glance at any given picture, there was nothing. But when I scrolled quickly through them, a smole vole-ish creature was zipping around the frame. I whiddled it down to a vole, and specifically a red-backed of sorts. My pictures were not nearly as crisp or close up, but that's what I'm going with. Nice pics!

That might have been the northern red-backed vole, Alyssa. A good find in my view!

Great post, as always :) Congrats on the Vole. Looking forward to seeing the rest of the cast.

Codger, if you're interested in seeing the picture of the RBV:

Love the little guys. Wonderful catches, Chris. I expect you're right - just like longicaudus in the Sierra.

Congrats Codge. Looking forward to the Mt. Beaver shots. So nice to be getting them in the middle of the winter. I am already getting antsy at the thought of chasing them again this Summer.

Thanks troops. Alyssa, I added your blog to the cam trap blogroll and commented on your Alaskan shots.

Awesome photos!
Do you actually have any plans to put a mini ir camera down there?
Do you have a snake-camera (endoscope) that plumbers use?

Brian, search the blog for keywords "mountain beaver" and "showtl" to find earlier posts on underground cam trapping. There are stills and videos of subterranean visitors. Your other comment on the Noah log -- that park borders Whitacre near Main St across from the high school. It's not far from my daughter's back yard. I've found a lot of dead wood and fallen logs in that park.

Brian -- the snake cam -- I have one I made from a Harbor Freight CCTV camera, but the IR illumination is too weak to be of much use except at close range. Better just to put a camera in the burrow if the burrow is large enough to accommodate. Correction-- Jonah rather than Noah Log.

Excellent photos of this secretive
little guy. I was thinking we that perhaps we could live trap them and train them to find truffles.