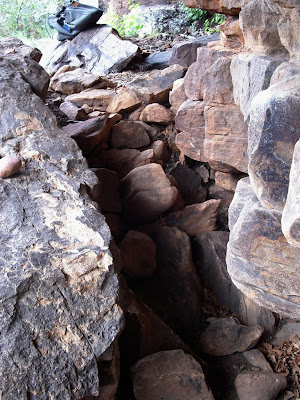 When Geronimo dictated his life story to S.M. Barrett he described the burial of a warrior. The body was laid to rest in a cave and hidden by piles of stones.

There are countless piles of stones in the rimrock. Most fell from the cliffs above and make sense geologically.

Other rock piles don't fit in. There's no indication they fell from the ceiling above. They are weathered differently and out of place.

This was one of those rock piles. It was made from rocks down the hill. Plus there are stone hammers and pottery shards nearby.

Who visits this place? 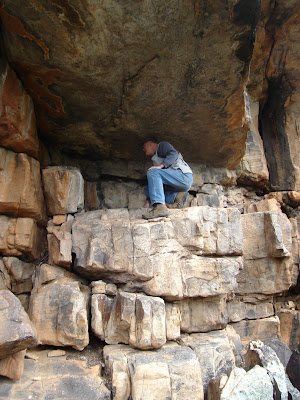 I propped the camera on a ledge above the grave. 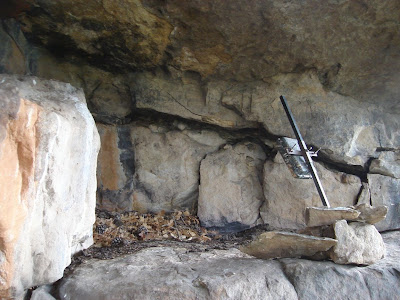 The grave keeper was a white-throated wood rat (Neotoma albigula). 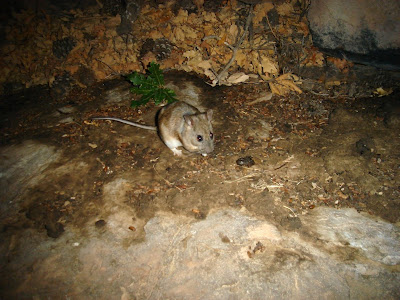 It looks like it's recovering from a gunshot wound, but that hole was made by a botfly larva. 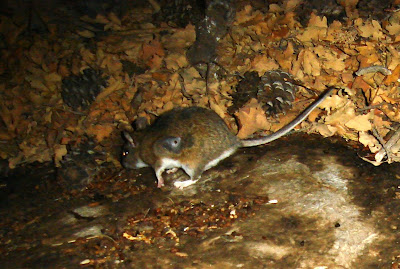 The Apaches know about wood rats. When Geronimo surrendered in southern Arizona and signed the peace treaty near Skeleton Canyon his band entrusted $150 in Mexican currency to a wood rat's nest.

They knew the money was safe with the rats, that the nests last practically forever. No doubt they intended to come back.

A year later cavalrymen found the money and cowboys destroyed the stone monument that marked the site.

But there's a good chance the descendents of that woodrat are still there.

Very neat post. When I moved down here I enjoyed discovering much of this area was important to Native Americans. It galls me how badly we have trashed it and I enjoy reading how you and others are making attempts to restore at least bits of it.

Having said that...I like snakes and mice and bugs and such, I'll handle any of 'em, bait my own hook and clean my own fish. I even pull the legs of grasshoppers to feed the birds (oh sorry...I suppose I didn't have to say that); but yanno...those damn holes the botflies leave give me the heebie-jeebies. Will you just quit...so I can get a decent night's sleep? I've had dreams of the wiggling monsters under my skin since I read that last post!!!


Seriously...keep up the good work; it's a joy to read you.

Beverly, I hear that pet warbles are the coming thing -- in the same spirit of wired eyebrows, liphooks, plugs, and scarified body surfaces. The difference is that a bot is like a bothersome child, eventually it goes away. (Bwaaahhaaaahahaha. . . )

I'm looking for help; I found a dead woodrat on my second floor balcony this morning. He appears to have been poisoned. Do you know of an agency in Oakland, CA, who will test the corpse? I contacted animal control, but I heard (from Yggdrasil Urban Wildlife Rescue) Oakland's animal control is unlikely to test for poison. I'm by Glen Echo Creek, and there is a lot of wildlife, so I'm really worried about someone spreading warfarin around.

The woodrat is in my freezer. :p

I found your blog a long time ago because of your amusing posts on woodrats.

You're a sick puppy!