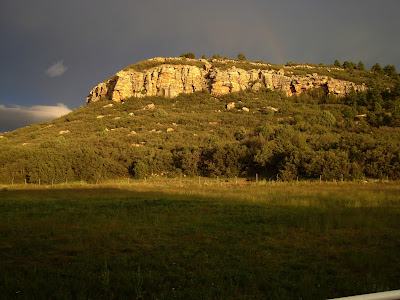 I have a powerful attraction to rimrock. For recreational land-based exploration it's the best.

That’s why the Millers’ dog Luna and I rambled the rimrock for the better part of two days.

The bluffs hold many secrets, and the alluvium guards the bluffs. So you don’t get there without a workout.

Of course that doesn't apply to dogs. Luna raced up the hill effortlessly, zipped here and there through the thickets, then raced back to me, as if to ask what’s taking so long?

I trudged around the boulders, and squeezed through the scrub oak which had an annoying way of whipping off my hat and snatching at my glasses.

The rock wall was my reward. There was grass, and thin trails skirted it here and there. 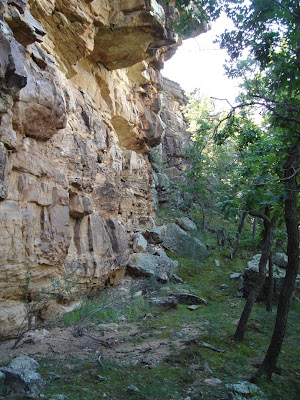 I dropped my pack, felt cool air on my wet back, and took a long draft of water. The pant-smiling Luna watched me for a few moments and then took off again.

Then I explored and realized that the rimrock feeds the soil at its feet. Pellet middens of woodrats may mummify, but a lot of it washes out of the fissures. The same must hold true for bat guano in caves and cracks. All these little guys eat a lot of roughage, you know, and are highly regular. 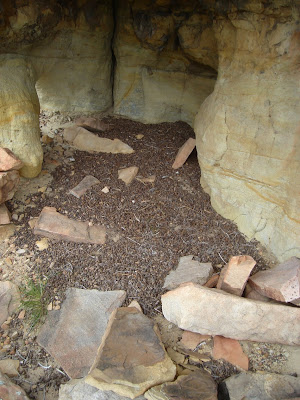 Cliff swallows make their own contributions, and then there are the bones -- rodent skulls and rabbit bones dropped from raptor eyries above and washed into rows of storm flotsam. (The better specimens now decorate the fireplace mantle in Brian's office). 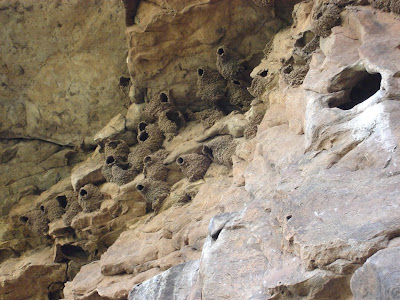 There were the overhangs with smoked ceilings and charcoal. 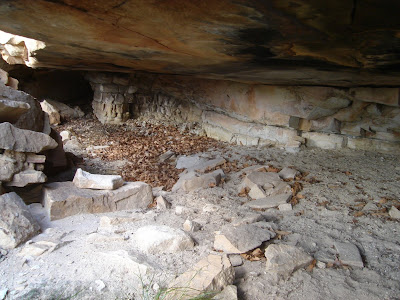 Most intriguing though were the slab caves, fissure caves, and recesses. Was Luna's caution due to some lingering bearish scent? 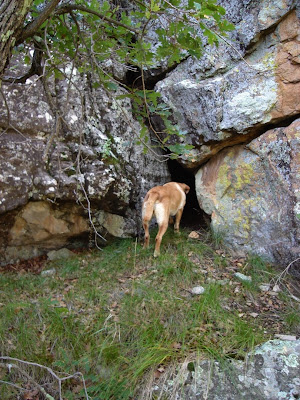 As I GPS'd one of the sites, I remembered the amusing tale of some South Indian colleagues who tracked a radio-collared leopard to a similar bluff cave in Mudamalai National Park. They were peering into the dark hole when the cat exploded from the opening like a snarling cannon ball.

It was getting late when Luna refused to heed my call. Then there she was above me, telling me there was another way back. I followed her up to the plateau through a deceptive cut in the rimrock, and we made our way to Falcon Canyon's bluffs. We climbed down the side canyon and followed it to the Mora River and home.

There's something to be said for canine company.
Posted by Camera Trap Codger at 9:01 PM

Did you know there is a rainbow in your first picture? It's hard to see, but it's there. Was that intentional, or a coincidence?

When are you getting a dog? :)

Chris I was right there with you and felt my heart pumping harder as you climbed the rim rock. Beautiful place and probably had some native american history.