Three bears and a bobcat 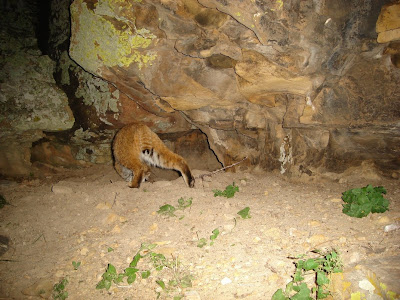 Brian checked the cams at Wind River Ranch and emailed a few jpgs.

Good dens are like prime real estate. Several den shoppers examined the burrow under the rimrock.

The bobcat sniffed at the entrance. If it entered the camera missed it.

Bear biologist Tom Beck saw this den last year and thought it was the work of a bear. The pictures seem to support the idea. 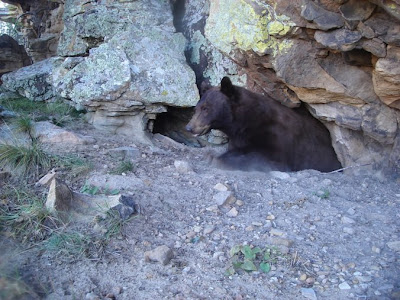 Mama bear came with two cubs, and plunged right in to start renovations. It looks to me like she’s digging, but the kids haven’t learned to pitch in. 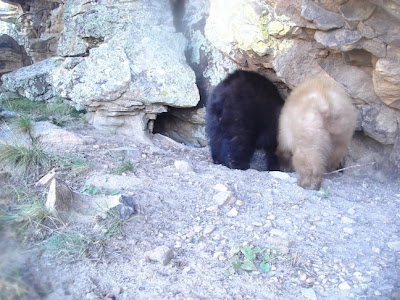 The pale cub is a pastel color phase that is not particularly common. At this latitude cinnamon colored bears are seen more often.

These cubs are small enough to have been born this year. They may still be suckling, but are taking as much solid food as possible.

We can expect the three bears to den together. Black bears breed every other year when times are good. Lactation inhibits estrus in the summer following birth. That means mama is into motherhood, and doesn’t put up with amorous males.

It isn’t till the second year that the family breaks up. When mama seeks carnal liaisons with strangers the youngsters get a rude awakening.

The problem for these little guys is the mast failure. There was nary an acorn to be seen when I was schlepping around the rimrock, but there were plenty of rosehips. Under these conditions the little guys might make it through the winter but could starve in the spring.

It boils down to the ability to put on fat. A trim bear can survive the winter because in dormancy the metabolism gears down to a low idle. But survival is iffy come spring, especially when it comes late. Fat bears still have energy to burn; skinny bears don't.

So let us leave our bears for now, and hope all works well. The camera will be waiting for their next appearance. 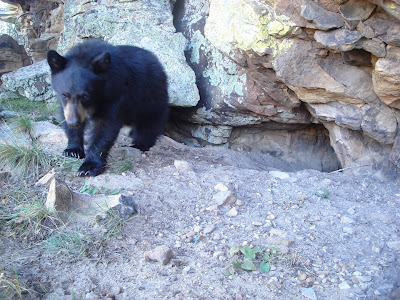 Wow...beautiful shots, as always. Someday I'll have a 'secret' camera! I mean it, too!

Here, in southern Colorado, we have several 'blonde' black-bears. And once while hiking, I saw a dark one with a dorsal stripe that made it look like a little punk rocker, in the dappled shade. And occasionally they are pintos…of a sort.

We often have the same problem with lack of food for bears…and then they invade our little town. Once there were more than thirty…breaking into everything! I just do not understand why people encourage such behavior with the way they handle garbage. I must admit though, sometimes they just come for the apples. Sometimes one has to actually watch where they walk, piles…chunky with apples…are everywhere!

Lack of food…I imagine at least half the problem is shrinking habitat, huh? We (and I include myself in this) continue to move into their homelands; shrinking the larger expanse of wild habitat they are used to traversing. Could part of the problem be that the acres/miles they used to claim are now too covered with asphalt, gravel and homes?

I dunno…I’m feeling these days like five is too many. Perhaps we should hold ourselves to only one or two children and slow our march to take-over the world. Yanno?

Three bears and a bobcat walk into a bar [insert punchline]. Great pictures!

Hi Chris
Great results for your efforts. Keep up the outstanding work.

Simply fantastic photos. Makes me want to travel to a location where the sun shines. Our rains have begun and should last till April, so I should get some nice pictures of mushrooms, moss and ferns. Had a green tree frog hiding behind my camera last week and took a picture of it when it climbed out.

I thought those cubs looked like this years and nice color combination. Think you could sneak into the cave in another month and get some great pictures LOL.

Thanks folks. We think the same way, Cliff. Wouldn't it also be neat to set the cam at the back of the cave after they're gone, to see who goes there?