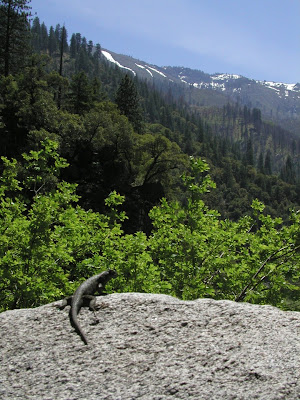 Have you ever had a Zen moment with a lizard?

It happens like this. The lizard is at the center of its universe, say on a rock with a commanding view. Its scales are coruscating in slanting light. It fixes you in its reptilian eye, and then does several push-ups. That's a Zen lizard moment. 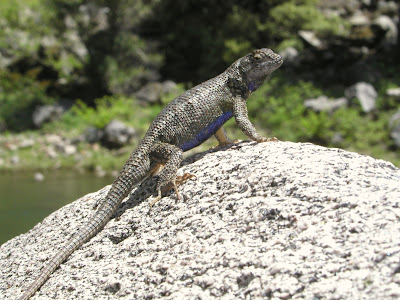 Simple things like Zen lizard moments are good for the spirit, especially when things like the economy are going to hell in a handbag.

So neighbor Richard and I hauled a new lizard rock to the garden. We already had one such rock there, but the lizards don't share it. Now two lizards can mount their respective rocks and do competitive push-ups.

This new rock wasn't what you would find at a garden center, but it was on my property and free. So we raised it with Richard's chain hoist, and lowered it into my pickup. Then we rolled it onto a dolly, and with much grunting planted it at its destination.

The Redhead however commented on the two-tone color -- reddish and gray.

"It's oxidation", I said. "It tells an interesting story of uneven aging, don't you think?

No response. (I knew what she was thinking.)

"Okay, I can power wash it and see if the red stuff comes off."

She said it wasn't necessary.

When I found her scrubbing the rock the next day, I rushed for the camera. But she made it perfectly clear -- there was no way she was going to illustrate this blog post.

The only evidence is this picture of her tools -- a scrub brush and a very large screwdriver. 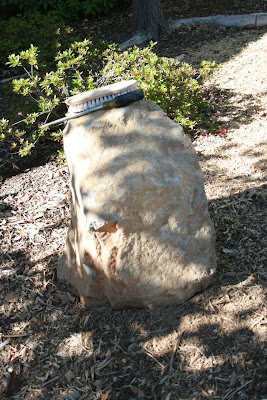 And with the cool weather here, I'll have to wait till next year for more Zen lizard moments.
Posted by Camera Trap Codger at 9:03 PM

Large screwdrivers are handy for fending off the paparazzi, eh?

You know, I never thought of that, but I think you are onto something. She's Italian, and now it all makes sense. Anyway, I found out today that the red color WAS due to dirt, and not oxidation. Why is she always right?

I had a really cool zen moment with a group of lizards in southern Arizona. I am a biologist, and as such I had a job as a biological monitor for a construction project. Well, for a biologist that is about as boring as it gets, watching other people work.

Well, one day I noticed that the earlesss lizards were handing around on this small rock outcrop near the construction. So I went and sat right in the middle of this outcrop very still until they started coming out again. Once I bcame part of the surroundings I would take bug sips from my camelback and squirt the water onto the top of a large rock that was cup shaped at the top. THe lizards started slowly but before long there were a dozen lizards climbing that rock to drink from this heaven sent pool. I took a lot of photos. I do not know if you can post a photo in a comment, if not I'll send a link to the photos. I was one with the lizards that day!

Gregl, wonderful observation and worthy of merit. Post a link so the mellow lizard watchers among us can get off on it.