The fluttering sound in the attic

[I recently recovered these pictures from a broken hard drive, and this is their story.]


I had dismissed my wife's suspicion that something was fluttering in the attic.

You see, I'm supposed to be the one with better hearing, but she's the one who's always hearing things.

And she was right. Something was fluttering up there.

I got the ladder and a flashlight and climbed up into the attic's furnace-like heat.

There I traced the mysterious noise to a narrow corner where a rather pathetic looking screech owl had become wedged.

It was impossible to reach it.

If you recall Colonel Nicholson's grimy and sodden appearance after his time out in the hot box -- I'm talking about Alec Guinness in Bridge over the River Kwai  -- well, that was me.

Sweating and covered with insulation I crabbed my way down the ladder and stumbled to the sink to rehydrate.

But time was limited -- it was a miracle the owl wasn't yet cooked.

It had to be close to heat stroke.

I returned to the attic with butterfly net, and it was easy work.

The hyperventilating bird had enough strength to flip on its back and grabbed the net with its sharp little mouse squeezers.

Back in the kitchen it looked like road kill, but it guzzled water freely, and I placed the quenched bird in the shade next to the garage. 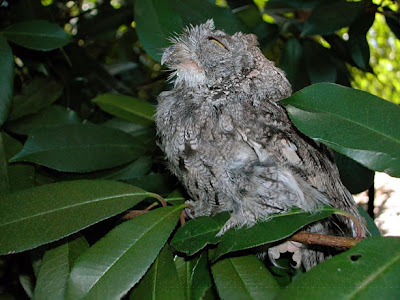 An hour later it flew to a higher perch where it dozed until dusk.

I think the little guy made it. There were no owl feathers to be found the next morning,
How did it get in the attic?
It mistook a terra cotta ventilation tube under the eaves for a suitable daytime retreat.
The chicken wire bird-and-bat filter had fallen from the tube earlier that week.
This was the event that launched my winter pastime as a builder of owl boxes.
Posted by Camera Trap Codger at 8:00 PM

Nice story. I'm glad you found the owl in time.

I'm SO happy you were able to rescue the little guy in the nick of time.

What a neat story. Thanks for sharing.

For some reason I could only get one of the photos to load (muct be a problem on my end)....but the story was enough!

Wow! So glad this story seems to have had a happy ending.

I like the expression on his face in the last shot. In one of the photos he looks like one of the Australian frogmouths.

This story brings back memories of rescuing owls from attics to Folsom Prison air ducts. I will blog about them one day.
.